Jorge Masvidal, Amanda Nunes, and two more cashed in at UFC 239, as four Performance of the Night bonuses were handed out.

UFC 239 proved to be another event brimming with impressive individual feats, and the post-fight bonuses reflected that. So for the second week in a row, no Fight of the Night was awarded. Instead, four fighters pocketed $50,000 by earning a Performance of the Night bonus. That included, not surprisingly, Jorge Masvidal, who set a new record for fastest knockout in the UFC, at a whopping five seconds.

Masvidal’s record setting effort came against Ben Askren, and saw the surly welterweight charge across the cage off the opening bell, delivering a flying knee that realistically landed within five seconds.

Also picking up a Performance bonus, Amanda Nunes, who surely settled the debate over who the best female fighter of all time is by finishing Holly Holm within a round. Nunes set up the finish with a head kick, and landed a few more strikes before the ref waved the affair off. Nunes now holds key wins over Miesha Tate, Ronda Rousey, Valentina Shevchenko, and Holly Holm, all current or former champions. And that’s just at bantamweight. Given she also knocked out Cris Cyborg to win the featherweight title, it’s hard to argue against her.

Jan Blachowicz earned a Performance of the Night bonus as well, for his second round knockout of former middleweight champ Luke Rockhold. Finally, Song Yadong picked up a bonus, the only man of the four not fighting on the main card. He earned his award for a first round knockout of Alejandro Perez.

Will the UFC finally get a Fight of the Night award in their next outing? We’ll find out next week at UFC Sacramento. 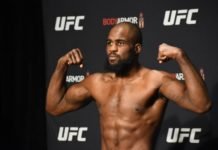