Despite moving up a full twenty pounds in weight as he joins the 205lb division, UFC 239’s Luke Rockhold doesn’t feel he’s lost any pop.

Las Vegas, NV — Former UFC and Strikeforce middleweight champion Luke Rockhold moves up to 205lbs this weekend at UFC 239. It’s a hotly anticipated debut, though Rockhold’s opponent, Jan Blachowicz, hasn’t exactly been getting the attention he probably should. So instead, Rockhold has been talking about Anthony Smith, Jon Jones, pretty much anyone in the light heavyweight division.

Even the light heavyweight division as a whole seems to be in his crosshairs. Asked at the UFC 239 media day Wednesday whether he was concerned about losing his “pop” in his new division, Rockhold responded that the opposite is the case.

“If anything I’ve gained more pop. I’m faster, I’ve got more technique. These guys don’t have any skill, at light heavyweight.” Those are certainly fighting words, but then, that’s why Rockhold is here.

“So I’m going to bring that, I’m going to bring all the power I’ve come up with,” the former champ said. “I’ve trained with [Daniel Cormier] my whole career, I know what it’s like to fight the best of the best at light heavyweight. And I’ve added the extra strength and size to do so.”

“I’d known that for the last couple years, and I wanted that. That was the mindset, and my body failed me the last time out. It was just too extreme a weight cut.” That led to a knockout loss at the hands of Yoel Romero, in what would have been a title fight for Rockhold had champ Robert Whittaker not pulled out of their fight at UFC 221.

But if you think Rockhold is overlooking his UFC 239 opponent, Poland’s Blachowicz, a former KSW champion, think again.

“I’m here, I’m here to fight Jan Blachowicz,” said Rockhold. The problem, it seems, is that “there’s not much to say about Jan Blachowicz. So I’m going to focus on myself. People present the questions, I answer them.” 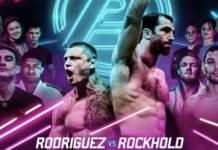 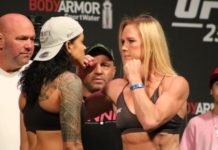 UFC 239 Aftermath: What’s Next After a Main Card Full of Domination? 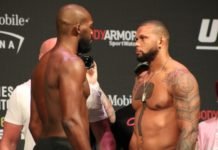