Another weekend in fighting means more MMA prospects to pay attention to. This week, we’re highlighting LFA 70, Cage Warriors 106, and others.

I won’t be including any of the prospects on the Contender Series as I will do a breakdown for each episode. Check out episode two’s breakdown here.

Hailing from Clarksville, Tennessee, Landwehr has been tearing it up in Russia and other countries for M-1. He is the current M-1 champ with one title defense and has beat some solid competition. Only one of his opponents has had a losing record and that was in his pro debut. Landwehr has been taken down but always works back to his feet. He has been dropped many times but is tough as hell, always recovering. “The Train” has a lot of gas as his pressure will eventually break his foes. He has good wrestling, ground-and-pound, and good striking in close quarters. He defends his title against Viktor Kolesnik (16-3-1), who Nate has already beaten.

Still young in his career, Alberth has been very impressive with all five wins coming in the first round. He’s gotten it done on the mat with decent wrestling and even better finishing ability with his ground-and-pound. The Brazilian also is a dangerous striker who does an excellent job at slipping punches and landing big counter strikers. He’s quick with his hands and has a lot of power. He is young, but someone to watch for. He fights Nathan Batista (11-5), who is a good test.

Puerta has had a lot of speed bumps in his career but has now hit his stride and is on a six-fight win streak, the biggest of his career. He is also the Titan FC champion. On the feet, he uses his range well with jabs and knees. He’s much better on the mat, though, using his length. Puerta is a big submission threat with nine subs in his career by five different ways. While he’s been improving, I’m not yet sold on him. He fights Claudio Ledesma (16-7) who Puerta should beat.

Gooden is 7-1 in his last eight fights with his loss coming to former UFC fighter, Michael Graves. He does have a win over WEC/TUF 14 veteran Micah Miller though. Gooden has some holes as he still needs to work on his takedown defense which Graves was able to exploit. Gooden is well-rounded with good wrestling, striking, and athleticism. He’s very explosive an everything he throws is with ill intentions. He fights Bruno Oliveira (7-1) who has not fought anyone near as good as Gooden.

Martin carries a lot more weight than most fighters but that doesn’t stop him from being a solid prospect. He is foremost a wrestler and a very strong guy, being able to lift opponents and slam them to the mat. Once on top, he is staying there as he knows how to use his weight but doesn’t just lay and pray. Martin has very good ground-and-pound, and on the feet, he does have knockout power but relies more on his wrestling. His loss is to veteran Leroy Johnson but his last win came against Contender Series and TUF fighter Josh Parisian. He fights Renan Ferreira (5-1).

“Problema” is a giant standing at 6’10” who comes out of Rio de Janeiro, Brazil. With only one loss, Ferreira has a perfect finish rate. All those finishes have come by TKO mostly by ground-and-pound. On the feet, he does hit hard, has heavy leg kicks, and a good jab. Ferreira though is a problem on the mat being such a big guy, he does not let up with his heavy ground strikes. His wrestling isn’t great but he uses his size to get the fight down. He fights Brett Martin (7-1).

After a 6-1 amateur career, Schiro has grown into a very improved fighter. His stand-up still needs some work but he at least has heavy leg kicks. He also strikes well to close the distance in order to work his takedowns. Schiro has solid wrestling, but his jiu-jitsu is his strong suit. He is very slick with his transitions and while his ground-and-pound is good, he is excellent at hunting for submissions and closing the fight. He fights Rmandel Cameron (6-4) who he should beat.

Undefeated as a pro and as an amateur going 6-0, Polizzi has the recipe to be a big prospect in the 205 weight class. Polizzi is a D1 wrestler at Northwestern University from 2010-2015 and was a state champion. He needs work on his feet but his wrestling and athleticism will take him far. He fights Pierre Walters (1-0), who Polizzi should outwork.

Houston is an excellent up and comer out of Scotland who is currently undefeated as a pro, and as an amateur, he was undefeated at 3-0. Houston is primarily a wrestler who does an excellent job at closing the distance to get his hands around his opponent and pull them to the mat. He doesn’t spend too much time on the feet but he does hit hard and he has good technique, but his head movement does need to improve. In some fights, when pushed, he does have problems with his cardio. He fights former UFC fighter Nicolas Dalby (17-3-1). If Houston wins, he could get signed to the UFC.

Jai Herbert, I would say, is still unknown to the majority of the fanbase but I predict that will change as he has the potential to become a Cage Warriors champion. Herbert has decent wrestling and good jiu-jitsu to fall back on but he is much more talented on the feet. He does a great job fighting long with an excellent toolset of kicks, punches, knees, and elbows. Herbert is dangerous in all aspects on the feet but his right hand is his money shot. He fights Jack Grant (15-4).

Grant has flown under the radar on the UK scene, but in the last two years, he has been putting on excellent performances and has put together a five-fight win streak. Grant is an all-action type fighter who will go for the kill regardless of if that’s on the feet or on the mat as he has a knack for putting guys to sleep. 13 of his 14 fights has come by the way of finish with seven KO/TKOs and six submissions proving how diverse he is. On the feet, Grant is a massive fighter standing at 6’1″ at 155 as he uses his range very well with lights out kicks and strikes. Grant will find himself on his back at times but he has a dangerous guard and scrambles very well. He fights Jai Herbert (8-1).

Hamlet has a background as a Greco-Roman wrestler who has wrestled since a young age and won a few championships along the way with an Olympic scholarship. He’s only been fighting since 2016 but is still undefeated. There isn’t much footage available but at 27-years-old, he has a high ceiling. He fights Modestas Bukauskas (8-2), who lacks TDD so Marthin should get the win. 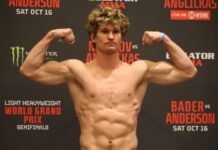