Why are Contender Series fighters doing so well in the UFC? What makes the show so special? Brendan Fitzgerald and Paul Felder break it down.

Las Vegas, NV — Brendan Fitzgerald and Paul Felder will anchor the broadcast duties as Dana White’s Contender Series gets underway with its third season tonight. And ahead of the show, the pair spoke to the media about what makes the show different from, say, The Ultimate Fighter.

Fitzgerald, for his parts, feels of the show that “it’s the perfect thing for an attention span in 2019. Tune in, four, five fights, end of the night, these guys are in the UFC. Or girls. It’s a perfect show.” Fitzgerald has been with the series since the start, and he recalled that “after the first one I did two years ago, I was like ‘first of all, I love this, and I’ve found kind of what I love to do. And second of all, this show is going to be something, because it’s fun to do, and it’s fun to watch.”

Felder, meanwhile, outlined why Contender Series fighters are succeeding in the UFC. Moreso, than say, some of their TUF counterparts. “I think for this particular situation, you’ve got the best regional guys. Guys that have either been in the UFC, or have been close for a long time. And they’re picking up the best of the best from around the country, and at this point, from around the world,” he said. TUF was a little different.

“With the Ultimate Fighter, you had to have personalities. You had to have a mix,” he explained. “Yeah you had guys that were really talented, girls that were really talented. But there were some people thrown in there for entertainment purposes. Where as this show’s entertainment purpose is ‘how good can you fight? and how much are you going to bring it on fight night?'”

The one hour show and all the nonsense of the reality show, “it’s gone. It’s just about the fights.” 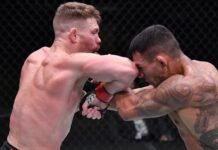