The hard work came in training. But at Bellator 222 on Friday, Taylor Turner says her win over Heather Hardy came more easily than expected.

New York, NY — When Taylor Turner stepped into Madison Square Garden to face Heather Hardy at Bellator 222, she was facing a mixed martial artist with just three fights. She was also, however, facing an undefeated, multi-division boxing champion. So while Hardy’s 2-1 record wasn’t that imposing on paper, her background certainly was.

Turner clearly knew her path to victory was on the ground. She got the fight there early, got mount, and earned herself a first round TKO win. She frankly made it look easy, and was still glowing after the fight, where she spoke to reporters including Cageside Press.

And while the fight itself may have looked easy, don’t make the mistake of thinking getting there was a breeze.

“No, it was not easy. We practiced the control. Patience was probably the theme of this fight,” Turner explained. “I went out with my complete game face on, expecting to have to take a couple of shots.”

She had prepared for that. The fact that she could do what she practiced, “it wasn’t easy, all the works has been done over the past six weeks since I found out about it.” That said, she admitted that “it came more easily than I expected.”

Earlier on, Turner was clearly still living in the moment. “I’m sure you’ve heard the saying ‘a moment sometimes lasts forever,’ and that’s how this feels,” she said.

“Coming into it I knew I was the underdog, I knew I was going to be against one of the champions, and that lit a fire under me to be ready from the beginning.” Boxing, MMA, a champion is a champion. “Honestly I dreamed of this, breathed it day in and day out, so to visualize it and have it come true is amazing.”

Turner (4-5) had suffered some setbacks in her career coming in. After going through a lengthy losing streak, Taylor Turner said, “I stuck with it even when people were like ‘Maybe it’s not for you, maybe you’re too nice or too happy or too whatever to be a fighter.’ I’m like ‘no I gotta do me.’ It’s amazing, I thank God.”

As to what got her to this point, Turner noted that her gym does a lot of mental skills training. Because “a lot of fighters get anxiety sometimes” — much of which, she noted, is self-imposed. “You start to win a couple, and you think ‘man everybody expects me to be this or that or anything.’ And to the extent you get off of why you do it or who you are or try to play into these things, I think is the extent you won’t do well.”

“Having some guidance back is really helped,” she revealed — plus focusing on the fundamentals, like keeping her hands up, being ready for Hardy’s hard right hand.

The feeling of stopping an undefeated boxing champion left her on a high, of course. “Oh my gosh, I have a feeling I won’t sleep for days,” Turner told reporters.

“I mean, like I said I have dreamed about this and thought it could come true and had faith in it, but still it is unbelievable. For all those losses, for all of those hard times, this feeling you can’t buy,” she explained. In essence, nothing beats it. “You can’t get it anywhere else, you can’t do anything for. This is why you do it. I wish I had better words, but both words and silence transgress, which means just — it is. So I wish I could tell you more, but it’s probably the top of the mountain. And you know the best views come after the hardest climbs. So I’m here.”

Calling it her biggest win, she added that she’s probably at the top of her career right now. “I can’t even imagine what would ever top this. This is it. It’s heaven. It’s amazing.”

Watch the full post-fight press scrum with Taylor Turner from Bellator 222 above! 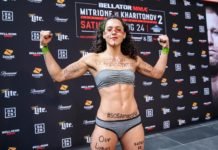