Returning to China with Legendary Quest on Saturday, ONE Championship was set for the debut of Yushin Okami, plus an atomweight Muay Thai title fight.

Making his ONE Championship debut on the card, meanwhile, was former UFC fighter Yoshihiro Akiyama. ‘Sexiyama’ was tasked with taking on standout Agilan Thani, and would be looking to avoid the struggles of other UFC transplants including Eddie Alvarez, Sage Northcutt, and fellow countryman Yushin Okami.

Check below come fight time for full results, and watch the live stream above where available! 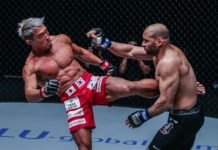 ONE Championship: King of the Jungle Photo Highlights