Juan Archuleta plans on making Eduardo Dantas eat his words at Bellator 222, with a side dish of fist. Then, it’s on to a title shot.

New York, NY — Just how many wins does it take to earn a title fight these days? 15? 16? 17? Juan Archuleta is on an incredible 17-fight win streak, and is looking for his title shot. In his last fight, he dabbled at bantamweight, as he has in the past. Tonight, at Bellator 222, he’s back up at featherweight, but facing off with a former two-time Bellator bantamweight champion, Eduardo Dantas.

Despite being an important and promising match-up, the move back up in weight wasn’t fully expected. At least not now. In fact, that’s the main wrinkle of the transition, Archuleta told Cageside Press earlier this week: “Just the short notice of the fight being announced, and matched up.” Still, ‘The Spaniard’ is “just ready to fight, taking on any comers that want to fight.”

Bouncing back and forth isn’t too big of a deal for him in the long run. “Yeah I’ve done it before, if you’ve followed my career, I’m champion in multiple weight classes for a reason. So it was not too bad of a cut.”

While there’s the Bellator featherweight grand prix to consider, Archuleta is a focused fighter. “First thing’s first, it’s going to be getting through Dantas. A win over him will pretty much open the door to a title fight, fighting Darrion, or the winner of [him vs.] Horiguchi.”

That would mean a trip back down to 135lbs. Which might feel a bit like yo-yo dieting. But when it comes to that, “the diet doesn’t really change too much,” he said. “I’m always eating clean, always eating healthy, it’s just a difference of the strength and conditioning, and the lifting, and everything that goes into preparing to be a 135’er, and preparing to be a 145’er.”

As for his opponent at Bellator 222, Eduardo Dantas, Archuleta told us that “I expect Dantas to be Dantas, a Brazilian fighter that goes out there and fights like he does. He’s seen guys fight like me and lost to them, so the pressure’s on him. A guy that’s a two time champ – once I take him out, the fight to make is going to be with Horiguchi and Caldwell.”

“After this win, coming in for this weekend, my fight’s going to be for the title coming up next.”

As to who it will come against, if that does indeed transpire, Archuleta sees Kyoji Horiguchi getting the win over current Bellator 135lb champ Darrion Caldwell. “I see Horiguchi getting it done again. There’s no way Caldwell’s going to be able to take it to Horiguchi. Horiguchi already proved before he could withstand the storm and submit him when it comes down to it.” Of course, that came at RIZIN 14 late last year, when Horiguchi submitted Caldwell in their first meeting.

Back to his own fight, where Archuleta had a fiery prediction. “I’m going to beat the hell out of Dantas, and he’s going to know that. All the words that he’s been talking online, he’s going to be swallowing with my fists.” 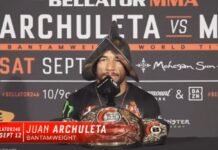 Bellator 246: Juan Archuleta Ready for Responsibility of Being Champion 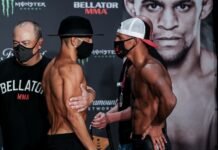 Daniel Cormier Doesn’t Believe He Could Have Provided Commentary for Khabib vs. McGregor