Texas’ own Alex Hernandez will get a hometown fight against Francisco Trinaldo at UFC San Antonio next month.

Prior to joining the UFC, eight of Alex Hernandez’s nine fights took place in Texas, with the other one occurring one state north in Oklahoma. After fights in Vegas, Canada, and New York, “The Great” returns home at UFC San Antonio. Greeting him there will be the always tough Brazilian Francisco Trinaldo.

Alex Hernandez made his Octagon debut on short notice against ranked lightweight Beneil Dariush and stamped his place in the toughest division in the sport with a 42-second knockout victory. He followed up with a big win over Olivier Aubin-Mercier to prove that the quick knockout was now fluke, earning him a fight with Donald Cerrone. Taking on Cowboy may have been too much, too soon for the 26-year-old, as he was knocked out in the second round of the Fight of the Night. Hernandez lives and trains in San Antonio, Texas, as a member of the Ohana Academy.

Francisco Trinaldo has been in the UFC since 2012 and won seven-straight fights from 2014-2016 with victories over Paul Felder and Yancy Medeiros. “Massanduraba” is 2-2 since then and is coming off a win over Evan Dunham. Trinaldo was supposed to fight last month, but his opponent, Carlos Diego Ferreira, had weight-cutting issues and pulled out the day before the contest.

UFC San Antonio takes place on July 20 from the AT&T Center in Texas. Former NFL All-Pro Greg Hardy takes on Juan Adams, and Dan Hooker fights James Vick. There is no main event set for the card, but there are rumors Valentina Shevchenko will make her next title defense on the card against Liz Carmouche. However, Carmouche is already set to fight Roxanne Modafferi at the event. 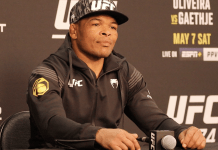 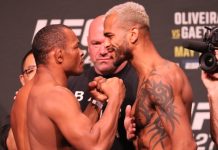