Heading into the semifinals of the Welterweight Grand Prix, Neiman Gracie looks to catch Rory MacDonald at just the right time at Bellator 222.

Rory MacDonald entered the Bellator Welterweight Grand Prix as the star of the tournament  with the bracket seemingly set up for him to reach the final.  But few expected the welterweight champion to proceed with so much speculation surrounding him.  On the other side of the bracket, Neiman Gracie looks to add to his family’s history of winning MMA tournaments with an upset of MacDonald at UFC 222.

Did we simply catch Rory MacDonald in a very human and vulnerable moment?  It certainly seemed so just over a month ago in April.  Coming off a draw in a difficult battle with Jon Fitch, MacDonald openly discussed in the cage the feeling that he was losing the killer instinct he had earlier in his career.  The questions soon came: Had the battles taken their toll on MacDonald? Had he become disenchanted with the sport after being a professional all of his adult life?  More followed and it all led to the same point: Was Rory MacDonald still the same great fighter he was before?

The fighter they referred to was the one who bested Tyron Woodley, Douglas Lima, Paul Daley, and who went to war with Robbie Lawler in one of the most exciting fights in UFC history.  He remains one of the best welterweights in all of mixed martial arts and a tournament victory adds to an already impressive resume. Should he dispatch both Gracie and Lima for a second time, it would put April in the rear-view mirror.  But coming up short in either contest will have many wondering if MacDonald can find his way back to his own impressive high standards.

Keep an eye out for those legendary Gracie hooks anytime @NeimanGracie is in the cage!

Those who have only recently been introduced to Neiman Gracie may not realize the impressive career he has already put together.  He began his professional career in the old WSOF before making the move to Bellator where he has submitted six of his seven opponents since 2015.   Carrying the family name, his credentials on the mat speak for themselves.  However, in modern day MMA it can’t be understated how impressive it is to continue to consistently execute his strategy of getting opponents to the mat when opponents are more knowledgeable and well-rounded than ever before.

Gracie is undefeated, but the experience and striking favors MacDonald.  To Gracie’s advantage, he recently witnessed MacDonald struggle mightily against another strong grappler in Fitch.  Keeping the fight against the fence and getting the fight to the ground at a smothering pace will be key.  Compared to Fitch, Gracie should look to unload with punches against the cage to do damage and further cut away at MacDonald’s gas tank for the five round contest.

MacDonald will need to establish his boxing early behind a crisp jab.  Being careful to not to overcommit to strikes is key as Gracie will be looking to change levels whenever possible.  Furthermore, he must avoid getting corralled against the fence where Gracie can restrict his movement and easily get to the clinch.

The winner will be facing former welterweight champion Douglas Lima in a fight set for late 2019 or early 2020.  MacDonald has history with Lima, having defeated him back in January of 2018 to win the welterweight title.  Gracie would have a classic striker vs grappler match-up against his countryman should he successfully upset MacDonald. 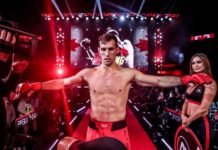 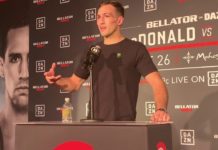 Bellator 232’s Rory MacDonald: The Rounds Just Got Away From Me