We got to know more about undefeated Attitude MMA champion and bantamweight prospect Chris Ocon.

Chris Ocon was born in Houston, Texas, but at the age of three, he moved to Nashville, Tennessee. Ocon found wrestling when he was 12-13. He took up wrestling following advice from his brother to help stay in shape for football. Unlike football, wrestling is an individual sport and that’s what drew Ocon in. He loved that in wrestling, it was all on you and you can’t blame anyone else. He had some negative things happening in his life, so wrestling was like the therapy to him, and he never wanted to leave the wrestling room so he didn’t have to return to reality. He made his amateur MMA debut in 2014 and had a successful career going 9-0. That includes his last amateur bout, winning the Valor Fights and the Summit FC title. A year later, Ocon made his professional debut and is now 4-0. He’s stayed fighting in the South including winning the Attitude MMA Bantamweight Championship in his last fight. 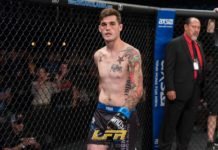