Juan Adams is getting his wish, as the UFC is planning a heavyweight showdown between ‘The Kraken’ and his despised rival Greg Hardy.

The UFC is looking to book a heavyweight grudge match for it’s upcoming trip to Texas. UFC San Antonio (UFC on ESPN 4) is the likely landing spot for Greg Hardy vs. Juan Adams, a fight months in the making. The bout was first reported by ESPN, and subsequently confirmed by Adams, though it is unclear if Hardy has signed on the dotted line yet.

However, according to multiple reports, the bout is expected to go down as planned. Which is big news for Adams, who has been on a twitter campaign to annoy (or simply get a fight with) Hardy for ages. #f*ckGregHardy is a frequent hashtag on Adam’s social media, and he has openly campaigned for a fight with the fallen NFL star, who was convicted on domestic violence charges that were later dropped on appeal when the victim did not appear to testify.

After being tossed out of the NFL for generally being a loathsome human being, Hardy decided to try his hand at MMA, going 3-0 as an amateur. Turning pro, he quickly made his way to the Contender Series, winning on Dana White’s show twice. After a third fight (while under contract to the UFC, but outside the promotion), Hardy made his debut against Allen Crowder at UFC Brooklyn in January — choking under pressure thanks to a blatantly illegal knee. However, Hardy (4-1) picked up his first UFC win with an easy TKO of Dmitry Smolyakov at UFC Fort Lauderdale last month.

Also known as ‘The Kraken,’ Juan Adams started his career at 5-0. However, he ran into a wall in the form of Arjan Bhullar at UFC Ottawa earlier this month, suffering his first career defeat. Which led him to immediately go back to the Hardy-bashing. Now, he gets his wish, and will face off with Hardy in just a couple of months. 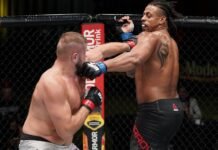 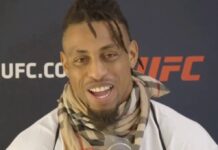