Team Alpha Male’s Chris Gonzalez extolled the virtues of wrestling in MMA ahead of this weekend’s Bellator 221.

Chicago, IL — Bellator 221’s Chris Gonzalez isn’t exactly a household name, yet. After all, he’s just 1-0, having made his debut as a pro last October after a couple of amateur scraps. It’s not for lack of effort, however. Gonzalez has seen a handful of fights and opponents fall through, both inside and outside of Bellator.

With that in mind, hopefully his bout with Charlie Radtke stays intact heading into the weekend.

It’s just a lack of willing opponents in the end, he told Cageside Press and other media outlets at the Bellator 221 media day Wednesday. “That seems to be the case. This is my second debut you could say,” he suggested. “I was supposed to be on the LA Forum card, I think that was two months ago. I’ve gone through four or five different opponents. This one hasn’t pulled out yet, but he’s got some time so we’ll see.”

Gonzalez is a Team Alpha Male member and was part of Team USA wrestling, not to mention a six-time Greco-Roman All-American. “I switched my focus from Olympic wrestling to fighting under the impression that I’d be able to get fights,” he said Wednesday. Clearly, that hasn’t worked out as planned. “As a wrestler, you show up to matches or a tournament and you’re going to get matches in. I just had that mindset coming into it. In fighting it’s a little bit different.”

Among those differences, “you have guys who want to protect their record. The best don’t want to fight the best. Thankfully, I’m at one of the best gyms in the world. I’m with Team Alpha Male. I’ve got the right guys behind me,” he explained. That team, of course, includes “Urijah Faber, Danny Castillo, veterans of the game. They prepared me for that. Chad Mendes too. They prepared me, they told me it was going to be hard to find fights. But we just stay the course.”

His experience in his original discipline, Gonzalez feels, makes him a tough man to beat. “I don’t really think there’s a lot of places where you can beat a wrestler,” said Gonzalez. “If you don’t catch him before he takes you down, you’re going to be in for a long night. A frustrating night.”

“We just have that allure. You see most of the best guys in the world seem to be wrestlers,” he continued. Case in point the current UFC welterweight champion. “You see what [Kamaru] Usman just did. You look at all the best guys. Jon Jones, he has that really extensive wrestling background, he could’ve been a DI wrestler. We’re just problems for guys who just want to stand there and be the next Conor McGregor. That’s not going to happen with us.”

So who is the best wrestler in MMA at the moment? Not Askren, or D.C., apparently. “Right now, I think it’s me,” answered Gonzalez. “I just don’t think anybody knows it right now. Kamaru Usman is right up there with the best of them. He might not be the best wrestler or best striker, but when it comes to mixing the sh*t up, he can stand with anyone. I feel like I’m on that same level. I’m going to showcase that.” 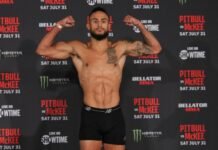 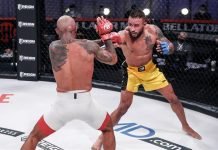