Seven years ago, Georgia’s Merab Dvalishvili arrived in the U.S. a green fighter, and learned what it would really take to make it as a pro. After UFC Ottawa, the bantamweight now feels “ready for everybody” in the division.

Ottawa, ON — Born in Georgia, Merab Dvalishvili has had a long journey to the UFC. On Saturday night at UFC Ottawa, however, that journey once again paid off. Dvalishvili (9-4) picked up his second straight win in the promotion, this time against the previously undefeated Ultimate Fighter 27 winner Brad Katona.

The bantamweight battle featured on the main card, and heading in, the attention was on Katona. After all, the Canadian was fighting on home soil. And not only was he undefeated, he had beaten nothing but undefeated fighters to win his season of TUF.

Which makes Dvalishvili’s win Saturday all the more impressive. And he was clearly happy with the outcome, as he told reporters including Cageside Press.

“This is [the] best feeling. Nothing better than this,” said Dvalishvili following the fight. “I’m fighting almost ten years, every fight is always difficult, always it’s not easy. Especially this guy, undefeated guy, he was a really really tough opponent. He is good everywhere. His striking is good, grappling is good. His cardio [is] very good. I expected a very good fight, like crazy fight.”

Dvalishvili’s plan was to take Katona down and control him, trying not to risk too much. In the end, it was a dominant win, a unanimous decision that should propel the Georgian fighter a little further up in the bantamweight division.

He also overcame an accidental clash of heads during the fight. Now, Merab “wants to fight the best guys.”

“This is [a] dream. This is a very big deal for my country. I’m from Georgia,” he said, calling the nation “a small, beautiful country. I make proud a lot of people from Georgia.” More than that, he wants to be a role model for children back home.

The journey from Georgia to the UFC brought Dvalishvili stateside years ago, and immediately tested his mettle. “I came [to] the USA seven years ago. I was a fighter, but I was an amateur fighter.”

Training with Aljamain Sterling, Dvalishvili quickly learned how much he had to grow. “This is different. Woah I thought I am a good fighter,” he recalled. But Aljo, “he beat me up, he choke me.” And quickly taught the Georgian fighter what it would take to be in the big leagues.

Every day from that point, he worked at getting better. “I think now I’m a different level. I can fight every opponent in my weight class. I’m ready for everybody.” 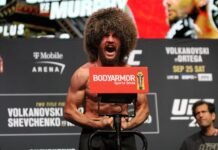 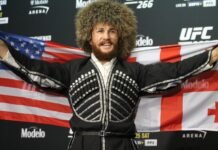 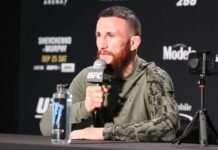