UFC bantamweight Vince Morales didn’t truly feel like a UFC fighter until earning his first win over the weekend.

Ottawa, ON — Vince Morales went fifteen minutes with an elusive Aiemann Zahabi at UFC Ottawa, earning his first UFC win in the process. It was a fight that saw Zahabi on his heels at the buzzer, never a good sign. Having got the better of a Canadian on home turf, Morales, who improved to 8-3 with the victory, was feeling confident afterward.

And satisfied with his performance, he told media members including Cageside Press following the fight Saturday night at the Canadian Tire Centre. “Very satisfied. It was a big deal for me to get my first UFC win,” he said. “Something I was seeing even before I had my last UFC fight is that I can’t legitimately consider myself a UFC fighter until I get a win. I got one. Although it wasn’t the type of exciting fight I normally like, it’s a win, and it put me in a position to show some good stuff next time.”

This time out, you might think there were fewer nerves for Morales, who has previously fought for Bellator, and on the Contender Series as well. Only, that wasn’t quite the case. “I wish I could say yeah. Not really,” he admitted. “Still a little nervous just because it’s a big deal for me to win. I like winning. It’s just the competitor in me. It makes me nervous when there’s a shot where you might come up short, especially in this sport. In retrospect, I’m happy with it.”

On always having nerves before fights in future, he added “for me, yeah. There are some psychos out there who don’t have nerves but that’s on them.”

While some fighters don’t worry about the odds going into a bout, Morales is not one of them. “I hate to admit it, but I think about that stuff a lot,” he explained. “Which is alright. I like being the underdog for the most part. I hate when I’m the favorite, then I feel like it really puts pressure on me. I don’t put much stock into it, but I’m aware of it.” He’s not alone in preferring the underdog role, at least.

At UFC Ottawa, that was underlined by the fact that Zahabi clearly had more to lose. “I did feel like that. Just because he was coming off such a long layoff and where he trains, the name on him and all that,” Morales said. “I felt like he had more to lose. I was the underdog trying to prove myself. I like proving myself. I like proving people wrong. That’s just kind of my thing.”

Morales certainly enjoyed his time in Ottawa, saying that “everybody’s been really nice. I’ve had a great time here. Everything looked pretty. I actually liked the weather too.” That last one might surprise some. Fight Week was awfully wet, after all. “I’m a big fan of the rain so that was cool,” he noted. “Nice change from Vegas weather lately. Everybody was really nice. All the staff, the hotel was great. The whole experience was awesome.”

As for what comes next, and where, Morales, who is originally from Oregon, said that “I’m good with [fighting] international. But for the people back home, supporting, I know a lot of people who want to come show their support live, so if I could get a fight in the states, that would be great for them. I love having people there cheering for me.”

“July 4th in Vegas? Sign me up. Is that International Fight Week? I’m in.” 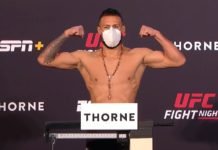 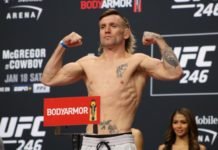 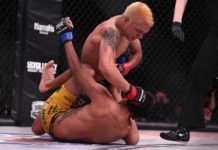 Welcome to the UFC: Timur Valiev