The UFC has two dates remaining for Canada this year, with shows loosely targeted for summer and fall — but while Vancouver is a strong possibility, don’t expect a Hamilton date any time soon.

Ottawa, ON — The UFC made it’s first trip north of the border Saturday night. UFC Ottawa (UFC Fight Night 151) was the promotion’s first trip to Canada’s capital since 2016, and second overall. By all markers, it was a more successful night. A more modern venue. A raucous crowd. A much more entertaining main event (UFC Fight Night 89 saw Stephen Thompson vs. Rory MacDonald fizzle).

A working air conditioning system. We still haven’t forgotten the sweltering heat and “we want A.C.” chants at the UFC’s inaugural trip to Ottawa.

Overall, the latest Canadian date was a success. And, as UFC Senior VP of International and Content David Shaw outlined, Canada continues to be a key territory for the promotion. One they’re trying to build in.

“Our content strategy is changing,” Shaw told reporters including Cageside Press post-fight, without going into details. “It’s becoming a lot more elaborate around our athletes, and hopefully that gives them the exposure to build their own fanbase.” And while Canada has always had an educated MMA fanbase, Shaw sees stacking UFC cards with Canadian talent as necessary.

“You absolutely need a Canadian star,” Shaw told Cageside Press. “You absolutely need an Irish star, British star, Australian star, doesn’t matter. We’ve got a business plan to take us all around the world. It’s much easier to execute that if you’ve got bonafide stars that the local markets can kind of rally around.”

That allows the UFC, in Shaw’s estimation, to both sell tickets, and build corporate sponsorships. Nevermind the massive reaction Cowboy Cerrone got in Ottawa. “Yes, Cowboy is amazing, and there’s only a few Cowboys. But, you know, some of the top reactions, or some of the levels of electricity we hit tonight were because Canadians were fighting,” said Shaw.

“We’re steadfast in our commitment to Canada,” Shaw stated later. “Three events every year. We want to be in as many cities across the country as we can. We’re always going to have a PPV, and a couple of the Fight Nights. That means we’ve got to look to other cities than Toronto, Vancouver, Calgary, and Edmonton. Ottawa, we were here three years ago, and would probably look to come [back] sooner than another three years.”

“Vancouver, we’re strongly looking at this year,” he added, when asked about rumors circulating all week. “We’ve got nothing to report at this time, we don’t know what platform it’s on yet.”

When it comes to the timeframe for the third show, or even the second, Shaw told Cageside Press that “we obviously want to try to space them out as much as possible. How about, Summer and Fall, type of thing? That’s kind of what we’re aiming for. Canada can be tricky, because we try not to have events in the summer, because everyone here likes to spend time away from the cities in the Summer.”

Shaw counts himself among those, although the counterpoint would be the booming concert industry, which does quite well in Canada all summer long. “The fall is tough too, because of the amount of hockey and basketball that happens in the country,” Shaw added. Of course, the UFC has opted to hold the last two UFC cards in Toronto in December. In the midst of the NHL season, in hockey-mad Toronto. The only Canadian city with an NBA team.

In any case, Shaw said, “we’re going to space it out as best we can, but we’re semi-aiming for summer and fall.”

Other cities were floated by Shaw as possibilities, though perhaps not in the immediate future. “We’re always sort of looking at Windsor, London, especially with the proliferation of some of the smaller events of promotions that are popping up, or the more frequent events I should say that are popping up.” Those, however, would most likely be Fight Night events.

“There are only so many cities we can go to with PPV, because we need the media market, we need the population. We’ll continue to look at that list,” he stated.

You can likely forget about Hamilton making the cut, however. Despite the steel city’s strong ties to MMA, going right back to the Score Fighting Series, Shaw doesn’t see an upside to bringing the UFC to the Hammer.

“It’s a good question, but what do you think?” he remarked at the suggestion. “If we’re going to Hamilton, maybe we should just be going to Toronto. It’s very very close, there’s ease of transportation, there’s a lot of facilities and infrastructure there, but I think if we’re going to come to this area of southern Ontario, it makes sense to go to Toronto.” 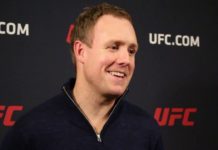 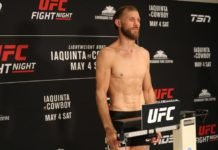