The Bellator MMA preliminaries in Birmingham promised fireworks, and for the large part, they did not disappoint.

The first relatively high profile name, Raphael Uchegbu from Team Kaobon, secured a win in his pro debut with a slick Triangle choke.

Akonne Wanliss delivered a brilliant performance. It was a striking masterclass when he won his fight against Sam Slater in the second round by TKO.

After a difficult start to life in pro MMA, it appears the 27-year-old has come on leaps and bounds recently.

Veterans Jim Wallhead and Lee Chadwick both won their fights respectively. Meaning that’s back-to-back wins for ‘Judo’, whilst Chadwick was happy to get back to winning ways after coming short against prospect Fabian Edwards.

Dominique Wooding showed his class. He delivered a knockout punch in the very first round over David Khalsa.

Check out this dynamite FULL first round from #BellatorBirmingham! 🧨💥 Watch @RealDWooding vs. @David_Khalsa and tune in with our app to see the remainder these 🔥prelim bouts! 📲 https://t.co/Lc3sFQmJi7 pic.twitter.com/uh7pHcMz5M

A name that is rising through the ranks and is one of the most exciting fighters Britain can boast, Wooding is slowly coming into his own and building a name for himself.

Yannick Bahati, who faced his originally scheduled opponents brother, showed his worthiness of being a black belt when he secured a first round stoppage via kimura. A successful start to life at light-heavyweight sees Bahati stop the rot of losses.

Kane Mousah made a winning start to life in Bellator, with a decision win over Mateusz Prikorz. Saul Rogers shortly followed and made a successful start to life back in the cage, overcoming Aiden Lee after a two year absence.

A classy performance from Saul will no doubt see him with a big fight next time out. Fellow featherweights will be keeping an eye on him. 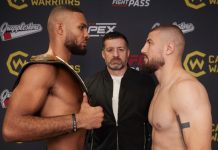 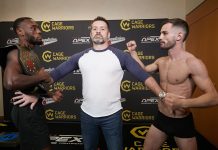 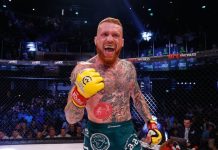