Following back-to-back losses against Jacare Souza and Israel Adesanya, UFC Ottawa’s Derek Brunson has enlisted the help of Henri Hooft and Hard Knocks 365, after being a “superstar” in his own gym wasn’t working out.

Ottawa, ON — Middleweight Derek Brunson is back in action in the co-main event at this Saturday’s UFC Ottawa. And like the weather in the Canadian capital, his career has had its ups and downs of late. Most recently, it’s a two-fight slump, though it’s worth noting that his last opponent, Israel Adesanya, now holds interim middleweight gold.

Facing the media on Thursday, Brunson told media outlets including Cageside Press about how he is adjusting for this fight — and even gave his pick for the winner of Adesanya and Robert Whittaker’s title unification bout.

“I don’t feel the pressure’s on me,” Brunson told reporters in regards to his recent losses. “I always want to perform well, and lately I have not been performing well. Particularly in the bigger fights. So that’s been the focus in my training camp, and pretty much in general.”

A couple of years back, Brunson opened up his own gym, and was essentially training from home, trying to juggle fight camps with family life. “That didn’t quite work out, as far as training and preparation,” he admitted Thursday. “You get out here and these big fights, these guys are hungry and they’re coming after you. So I had to make some changes to this camp, had to be away from the family for a little bit. I spent five weeks out in Florida training, just getting guys that can push me.”

Out in Florida, he’s working with Henri Hooft at Hard Knocks 365. “It’s good. It’s funny because it kind of reminds me when I first started training. When I’m at my gym, I’m like a superstar every day. When I’m there [Hard Knocks], nobody’s a superstar. Even like champions, he’s like ‘so and so won the belt, but this is what he did wrong.'” In short, Hooft is down to business.

That should serve Brunson well against a fighter like Elias Theodorou, who describes himself as a generalist. Brunson has been working at shoring up some of the holes in his came, and agreed with Theodorou’s assessment.

No doubt, he’ll be hard at work looking to prevent that. In the meantime, Brunson admitted that he didn’t watch his last opponent, Israel Adesanya, in his interim title fight against Kelvin Gastelum at UFC 236. But he did give his prediction for ‘The Last Stylebender’s’ anticipated title unification bout with champ Robert Whittaker.

“That’s going to be a tough one,” he suggested, despite his history with both men. “Neither one of those guys are particularly fast. Adesanya is more long, and he’s pretty technical. Same thing with Whittaker, he’s not as long, but he’s a real technical guy, he’s good at what he’s doing. Maybe I slightly favor Adesanya in that fight.” 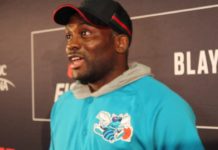 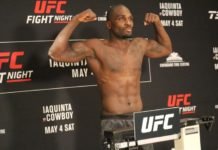