A kickboxing title fight between Nieky Holzken and Regian Eersel joins ONE Championship: Enter the Dragon alongside Shinya Aoki and Sage Northcutt.

ONE Championship’s return to Singapore next month, Enter the Dragon, has added a Super Series Kickboxing title fight. On Sunday, ONE officials announced via press release that Nieky Holzken and Regian Eersel would collide at the event, with the inaugural ONE Super Series Kickboxing lightweight title on the line. ONE Championship: Enter the Dragon already featured a lightweight title fight (MMA) between Shinya Aoki and Christian Lee in the main event, plus the debut of former UFC standout Sage Northcutt. Holzken vs. Eersel joins as the evening’s co-main event.

Dutch kickboxer Holzken made his ONE debut in November, where he knocked out Cosmo “Good Boy” Alexandre (who happens to be facing Northcutt at Enter the Dragon). He followed that up with a second win under the ONE banner in February.

A WFCA Kickboxing World Champion, he’ll be taking on his countryman Eersel, who knocked out ex-UFC talent Anthony Njokuani, also in February. 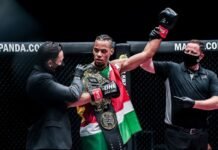