UFC 236 could signify a change in the way fighters approach weight-cutting, with three of the four title fighters having moved up in their career.

Three of the four fighters in the co-main and main event interim title fights have moved up from a lower weight class. Is the tide turning in MMA weight-cutting culture?

Max Holloway is in the conversation for greatest featherweight of all time.  Holloway has completely cleaned out the featherweight division of all competitors, winning 13 straight, having not lost since back in 2013. Blessed stopped one of the greatest fighters ever, Jose Aldo, not once, but twice. Max stands at 5’11” tall and also boasts a 69″ reach. This is huge for the featherweight division and it is a well-known fact that Max has to cut a lot of weight to get down to the weight class.

In April of 2018, Max Holloway attempted to step in on short notice to save the UFC 223 main event. The fight was at lightweight in a bout against undefeated Khabib Nurmagomedov. However, since the fight was on short-notice, Max’s weight cut was deemed unsafe by the New York State Athletic Commission. This is crazy to think about because Max fights 10-pounds lighter than lightweight normally, but couldn’t safely make 155 on short notice. This is a testament to how large Holloway is, and everyone knew that a shift up in weight class was imminent.

Dustin Poirier has been around for a long time and is a UFC lightweight staple. But before he was at 155-pounds, in the earlier part of Dustin’s UFC career he had a solid 8-3 stint in the featherweight division. After a first-round finish at the hands of Conor McGregor in September of 2014, Poirier decided it was time to move up. Since then, Poirier has gone 8-1 with one no contest in the lightweight division, only losing a fight to Michael Johnson in September of 2016. Poirier has recently beaten huge names like Anthony Pettis, Justin Gaethje, and Eddie Alvarez all by stoppage. The move up in weight class seems to be just what Dustin needed and his hands are sharper and more lethal than ever at lightweight. One of the last accolades left for Dustin to accomplish is winning the interim lightweight belt.

In his 2️⃣2️⃣nd Octagon appearance, the 💎 gets his 1️⃣st shot at 🏆 @DustinPoirier #UFC236 pic.twitter.com/AlTKApozXY

Kelvin Gastelum is a prime example of how being in the wrong weight class can potentially completely derail a promising career. Kelvin is 5’9″ tall and has a 71.5″ reach. Gastelum is definitely not the biggest guy in the world, in fact, he could be considered undersized at welterweight and is grossly undersized at middleweight. But, Kelvin is a thick guy and he’s admitted that he’s a foodie — the guy likes to eat.

Enjoying food while simultaneously being a professional fighter isn’t a crime, as long as the fighter is in the appropriate weight class to accommodate that lifestyle. And the appropriate weight for Kelvin Gastelum to accommodate his lifestyle was not 170. Kelvin missed weight in the UFC welterweight division once by 1.8 pounds and once by a whopping nine pounds. In the bout where he missed weight by nine, not only did he lose the bout by split decision, to Tyron Woodley, but he was also forced to move up to the middleweight division immediately. Kelvin moved back down to welterweight after just one fight but it wasn’t long before he missed weight again and was forced to move up to middleweight for good this time.

Despite being undersized in the the middleweight division, Kelvin has successfully made a super impressive title run. I think this has to do with a few factors, for one thing, Kelvin is very fast with his hands and at middleweight his hands and counters are even faster. Another thing is the UFC’s middleweight division is nowhere near as deep as its welterweight division in terms of unranked talent. Guys ranked well outside of the welterweight top 15 are top notch while this just isnt really the case at middleweight for the most part. Not to mention since Kelvin is feeling better mentally and physically because of the eliminated excessive weight cut he is able to fight at a higher level than before. Kelvin has struggled against long rangy guys in the past as 2 of his 3 losses are to Chris Wiedman and Neil Magny. The Last Stylebender could be a huge threat to Kelvin if he can not overcome his size and reach disadvantage when striking or looking to take the fight to the ground.

Can @KelvinGastelum top it in Saturday's co-main event?! #UFC236 pic.twitter.com/3ItLERoFtk

Khalid is a 26 year old German rising prospect that is new in the UFC. The Warrior stands at 5’7″ tall and has a reach of 69″. Khalid’s last fight 2 fights were at 145lbs. and the second of which, his UFC debut, he lost. So now, Khalid is moving back down to 135lbs. and taking on Boston Salmon.

Lauren Muller is a 5’5″ tall, 27 year old that is moving from the women’s flyweight division down to the straw weight division. After the first loss of her professional career, Lauren is moving down to strawweight (115lbs.) from flyweight. Mueller has had at least 3 fights at 135lbs. so she will definitely be a fighter to watch on the scale to see if she can make weight. And if Mueller does make weight look to see if her cardio is affected come fight night against Poliana Botelho. 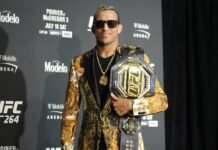