On January 18, 2019, TJ Dillashaw would turn in what ended up being a failed drug test. After vacating the bantamweight title, on Tuesday, the illegal PED was brought to light, and it also delivered a two-year suspension to the now former champion.

On Tuesday afternoon, the U.S. Anti-Doping Agency (USADA) suspended TJ Dillashaw for two years following a failed drug test taken prior to his super-fight with current flyweight champion, Henry Cejudo. EPO, an injectable PED, was found in his system and will now keep Dillashaw out of action until he’s 35-years-old.

At first, one may question why such a lengthy suspension after just one failed drug test, however, EPO, also known as Erythropoietin, is a clear performance-enhancing substance.

But what is EPO?

According to the USADA website, “EPO is part of a class of substances called Erythropoiesis-Stimulating Agents (ESAs). In a clinical setting, EPO is primarily used for kidney failure, chemotherapy, and other medical conditions involving red blood cell loss and anemia.”

EPO helps the body produce a higher red blood cell count. For every red blood cell, there are four hemoglobin, which carry oxygen throughout the body. While blood doping, you are essentially increasing the amount of oxygen your body will provide your working muscles, which “can increase their (the athlete blood doping) aerobic capacity and endurance, as well as improve recovery.”

A lengthy history in endurance based sports, EPO is prohibited in sports at all times under WADA’s prohibited list.

How is EPO detected and how long does it stay in your system?

Thanks to the mentioned above lengthy history of EPO in sport, and the USADA website’s blood-doping section, we know that the illegal injectable can vary in how long it remains in your system, which is dependant on the person, dose, how frequently they’re injecting, and many other factors.

A serious violation, detection is huge for what is a very effective doping practice.

“A test for EPO was first presented at the 2000 Olympic Games in Sydney, Australia that was based on a complementary analysis using blood and urine matrix. With this test, a blood screening took place first, followed by a urine test to confirm possible use of EPO.”

What does this mean for the legacy of TJ Dillashaw?

Prior to the big announcement of the failed drug test, TJ Dillashaw was in talks with the UFC about a rematch with Henry Cejudo at bantamweight, looking to find redemption in his most recent loss to the Olympic gold medalist at flyweight.

The two-time bantamweight champion would first obtain gold in May of 2014, TKOing the champion, and one of the best in the world at the time, Renan Barao. Moving ahead, Dillashaw would score a second win over Barao in a rematch, two victories over former teammate Cody Garbrant, Raphael Assunção, and John Lineker. Now, his past resume and future seem uncertain.

Last year, Garbrandt took to social media, replying to a previous tweet from Dillashaw, saying, “No s**t! I’m talking about the march fight and then you said you were hurt, must be all that EPO going to your head! Have a safe camp see you in aug!” 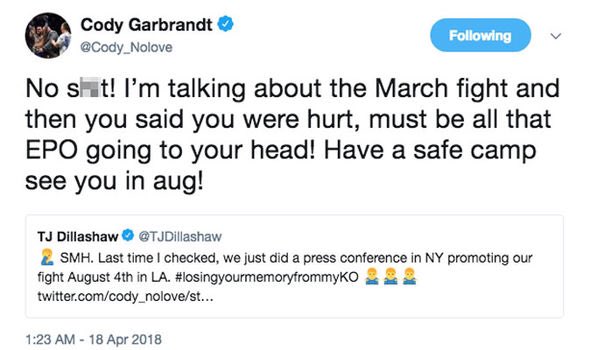 The tweet above suggests members of Team Alpha Male, as previously stated by Garbrandt and others of the training facility, were clearly aware of the doping that was allegedly going on.

UFC Vice President of Athlete Health and Performance, Jeff Novitzky, spoke with ESPN following Dillashaw’s suspension, saying, “I’m quite familiar with EPO from my days investigating professional cycling teams. It’s a very effective substance. It’s not a substance you find in contaminated supplements, it’s injectable only. You have to know what you’re doing when it enters your system.”

He continued, “On a scale of seriousness in anti-doping, it’s up near the top.”

Though he’s coming off of a loss, TJ Dillashaw is still one of the best bantamweights around, atop one of the more stacked divisions the UFC has to offer. With many up-and-coming potential title challengers, the 135-pound weight class will move on without him, as the promotion has already scheduled a title fight between Henry Cejudo and Marlon Moraes.

With such a serious doping offense, it’s clear Dillashaw will move forward, if he decides to return, with a huge tarnish on what was an impressive career.

TJ Dillashaw has not commented on the positive findings of EPO since his original statement regarding the drug test violation and vacation of his title. 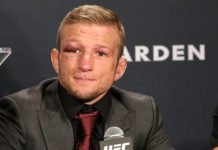 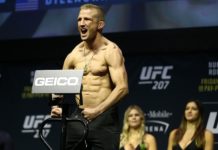