Neiman Gracie will be receiving a welterweight title shot at Bellator 222 as a part of the Welterweight Grand Prix and was featured at the event’s press conference.

New York, NY – Neiman Gracie has a title shot waiting for him at Madison Square Garden as he will be taking on the winner of Jon Fitch vs. Rory MacDonald at Bellator 222. Gracie lives and trains in New York, and that makes for a comfortable lead up to June’s fight night.

“I don’t believe in advantages. Once the cage is locked, we are 50/50. But fighting at home is great. I get to sleep in my bed, in my apartment. It’s like going to sparring for me, going to the gym and sparring. It’s great.”

Gracie is 9-0 in his career with seven of those fights happening in Bellator, winning by submission in six of those contests. After years of hard work, Gracie will finally get that title shot.

“Finally. It’s about time. I’m ready and I’m a more mature fighter now. I think everything is happening at the right time. I’ll be ready to give my best. I’ll be training really hard.”

The two current fights in the welterweight tournament are Rory MacDonald vs. Jon Fitch, and Michael Page vs. Douglas Lima. Gracie gave his thoughts on both of those fights as he awaits his semi-final matchup.

“It’s a great fight. Rory is definitely the favorite, but Fitch, his game is really hard for people to deal with. I don’t really know what’s going to happen, but it’s going to be a great fight and I’ll be ready for whoever wins.

“I think Douglas [Lima] is the favorite. But MVP is a guy who can hit you with something and knock you out. It will be a tense fight, especially because I think Douglas will keep this fight standing up. It’s going to be a great fight.”

The Gracie family name has been around since the beginning of MMA, but with Kron Gracie and Neiman Gracie performing well, there’s been a resurgence in the family tree. Kron, of course, won his UFC debut by submission in just over two minutes in February.

“It feels awesome. His fight was a perfect Gracie Jiu-Jitsu fight. It couldn’t be better. All of us, we are all proud of him and I can’t wait for his next one.”

Neiman Gracie’s last fight, his grand prix opening round win over Ed Ruth, took place in Hawaii, and that was an unforgettable experience for him.

“That was awesome. I think my two fights that I enjoyed the most were here at the Garden and in Hawaii so I hope that happens every time. It’ll be here to Hawaii, Hawaii to here. I hope after the fight here in the Garden that the finals will be in Hawaii.”

No matter who is across the cage from him at the Garden in June, Gracie knows how he’ll win.

“It feels great, I believe I’m where I’m supposed to be. So I’m going to put on another show and get one more submission.”

Bellator 222 takes place on June 14 and will air live on DAZN from Madison Square Garden. 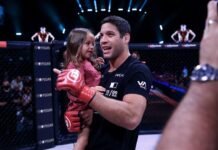 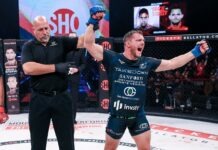 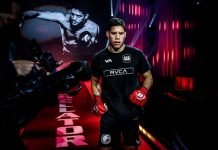