Kennedy Nzechukwu was on his way to a debut victory at UFC Philadelphia, but Paul Craig hit another last minute triangle choke.

Kennedy Nzechukwu is yet another promising fighter from Nigeria. Nzechukwu twice was on Dana White’s Tuesday Night Contender Series, winning both times. The undefeated light heavyweight won with a first-round head kick the second time around, earning him a UFC contract. Of his six career wins, four have come by knockout, including his last three outings.

Paul Craig had plenty of hype behind him coming into the UFC with an 8-0 record and seven submissions, providing a unique skill-set for the light heavyweight division. The Scottish fighter lived up to expectations in his promotional debut with an armbar finish that earned him a Performance of the Night. However, he was knocked out in the first round of his next two fights. He then welcomed top Russian prospect Magomed Ankalaev to the Octagon, and was dominated for 14 minutes and 50 seconds before securing a miracle triangle choke to win the fight. “Bearjew” will be looking to recover from a loss to Jim Crute in his last outing.

Kennedy Nzechukwu quickly pushes Paul Craig against the fence and fires a head kick. Craig quickly shoots for a takedown but Nzechukwu lands Travis Browne style elbows causing a cut on Craig. Craig stays aggressive trying to get this fight to the mat, even pulling guard. Craig would lock in a nasty armbar that looked close to a break, but Nzechukwu showed good defense. In the last minute of the round, Nzechukwu landed a left head kick having Craig slump to the mat but Nzechukwu wanted the fight upright.

Craig was the one to open up the second round with a pair of nice thumping body kicks. Craig has no desire fighting on the feet, as he dives for the legs to try to get this fight on the mat. As the shot was weak, Craig regrouped and got Nzechukwu down. Nzechukwu did get the top position and landed some big elbows that would bring more blood to the side of the head of Craig. The last minute and a half was a stalemate on the feet, but it was Nzechukwu pressing forward.

Nzechukwu continued to stay in the face of Craig but is lacking in output. Craig does a good enough job throwing the front kick to keep Nzechukwu not wanting to let his hands go. Nzechukwu’s most significant shots seem to be his eye pokes as he strikes again, and this time referee Keith Peterson takes a point from Nzechukwu. Craig visibly wants this fight on the mat but continues to shoot from afar, making it easy for Nzechukwu to defend. The failed takedown attempts from Craig are allowing Nzechukwu to get top position. As Nzechukwu attempted to pull away from the guard of Craig, Craig grabbed the wrist and pulled Nzechukwu right into a triangle. The triangle was super tight and Nzechukwu jumped to his back only for it to tighten up and he tapped.

Paul Craig def. Kennedy Nzechukwu via Submission (Triangle) in Round 3 (4:20) 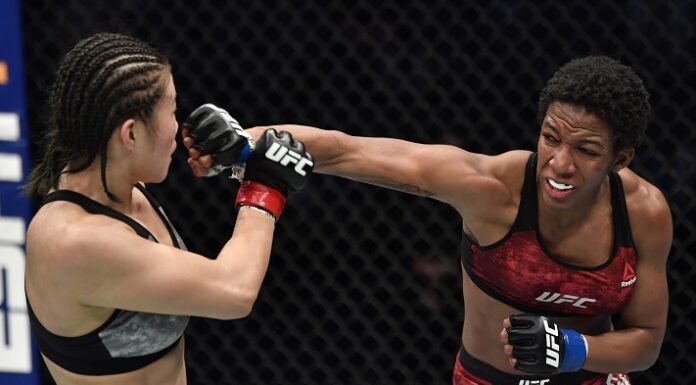