With his back against the wall at UFC Philadelphia, Josh Emmett scored a last-minute knockout over Michael Johnson.

Josh Emmett will step into the Octagon for the first time since headlining UFC Orlando in February 2018. Emmett, a Team Alpha MMA product was 3-1 in the Octagon with all of his fights lasting 15 minutes each before getting a short-notice opportunity against perennial contender Ricardo Lamas. Emmett missed weight, but knocked out Lamas in the very first round. That earned him a main event fight against veteran Jeremy Stephens, but it was too much too soon for the 34-year-old, who was knocked out in the second round.

Michael Johnson was a finalist on the 12th season of The Ultimate Fighter back in 2010 and has carved out a nice 20-fight career with the UFC. His record is a less than stellar 11-9 in the Octagon, but wins over Tony Ferguson, Edson Barboza, and Dustin Poirier prove that he can compete with anyone on any night. Johnson moved to featherweight last year, and after losing in his debut to Darren Elkins, “The Menace” bounced back with wins over Andre Fili and Artem Lobov.

Round one was a close round to score, both men had their moments in a stanza that was entirely contested on the feet. The Menace found a home for his quick left hand a couple of times throughout the opening five minutes, while Emmett also had success on the feet with strikes. Very close round to score, but with Johnson’s nice striking and consistently finding a home for the left hand, he likely won the round.

The second round was very reminiscent of the first. A close round that was entirely contested on the feet, with the exception of a final second takedown attempt from Emmett. Emmett looked frustrated at times as Michael Johnson led the dance. Johnson had the quicker hands and landed more nice left hands. Johnson had a lot of success as Emmett bit a lot on Johnson’s feints. Overall, a good round for Michael Johnson.

CagesidePress Scored the Second Round 10-9 Johnson

Josh Emmett continually looked better as the third round went on. He started to find a home for the right hand, and eventually as the third round was coming to the final minutes, he hit Johnson with a giant overhand right to end the fight. Johnson was out cold, and Josh Emmett just secured one of the biggest wins of his career. 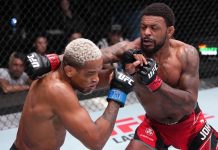