It’s a big weekend in the MMA world and there are plenty of up-and-comers in action who are worth your attention.

Kitt Campbell is well-rounded overall. On the feet, he has power in his hands and is quite explosive and quick. He is good in the clinch throwing relentless knees and lethal elbows too. His wrestling is good as well with solid entrances to his takedowns leading to good follow-throughs. On top, Campbell has good ground-and-pound and is a submission threat. He moves well for a big man. At times, he is stationary but once on the mat, he is fluid with his movement. He fights Beau Rawiri (7-5-1), who is not on his level.

Just a year ago, Jeremiah Wells was only 3-1-1 and on the cusp of turning 32. Now, even at 32, he’s got a good record and is the current CES title holder. Wells is a very explosive fighter who will attack in bursts and is willing to throw flying knees and superman punches. He also has some decent wrestling to fall back on. Overall, he’s very fun to watch and a win here may just earn him a spot on the Contender Series. He fights Vinicius de Jesus (7-2) who is a good test for Wells.

Before transitioning over to MMA, Gravely was a standout wrestler in high school who was All-State four times, an All-American three times, and a two-time state and regional champion. He also became a two-time conference champ at Appalachian State University. His wrestling is solid as he shows a lot of quickness and athleticism when he shoots in with a near-perfect takedown percentage. On the mat, he is at home as he has perfect control while always being in the right place when there are scrambles. On top of that, his ground-and-pound has fight-ending capabilities. He is a bull on the feet, pressing forward and while he doesn’t have a knockout in his career, he does possess heavy hands. However, they are used more to close the distance. He fights Darren Mina (10-7) who is on a two-fight skid.

*Also watch for Fabio Cheran and William Knight on this card.

Obviously, his wrestling is his bread and butter. Dominic Mazzotta has judo, trip takedowns, slams, double legs, and just tearing his opponent down to the mat. He has decent ground and pound, but it’s when he takes the back that he is most dangerous, with seven submissions coming via rear-naked choke. On the feet, he doesn’t do much, but he has good power in his hands and solid kickboxing. His only two losses are to former UFC champ Cody Garbrandt and Bellator contender AJ McKee. He fights Shawn Bunch (8-3), who just beat Joe Warren, so this is a big fight for Mazzotta.

Nicknamed “The Grinder,” he holds true to that title. Jake Heffernan will take no time putting his opponent to the cage, eliminating space and tiring his opponent out. He is a good wrestler who has excellent level changes with well-executed double leg takedowns, but does a great job of using trips to get his opponents to the mat as well. Heffernan has good jiu-jitsu where he is more dangerous with submissions off his back, as he is always active. Heffernan also has some good ground and pound where he loves the elbows. He does tend to slow a bit, but that’s because he is always working. He fights Gabriel Silva (6-0), who we’ll break down below.

Gabriel Silva is the younger brother of former UFC fighter and current Bellator fighter, Erick Silva. On the feet, he is a very good striker marching forward firing the right hook after the left hook over and over again with a lot power and excellent precision landing on the chin. He is always moving forward landing but he can also shoot in and get the takedown cause he does very well with his wrestling. On top, he has good BJJ he knows how to pass guard and transition to better positions but can unload ground and pound also. Overall a solid all-around fighter but this is his first fight in two years. He fights the aforementioned Jake Heffernan (7-0).

Hill is only 4-0 but he also went undefeated as an amateur at 3-0. The Puerto Rico native is a very explosive fighter with a high finishing rate, putting all but one of his opponents away. Hill has a powerful and very quick head kick he loves to throw. He does have a problem spamming the head kick and not setting it up enough. So far he has gotten through his fights with pure athleticism, but he does have a good future. He fights Jhonoven Pati (4-2), who is a banger, so expect a finish.

The Russia native has a background in Combat Sambo as he is the former World Universal Combat Champion, the winner of the Russian Combat-Sambo Cup, and a European champion. He’s still very green and relies heavily on his strength and athleticism. He needs to work on not being so wild with his striking and needs to not allow his opponents to push him against the ropes as much. In the clinch, Ibragimov does utilize trips and has excellent judo throws he likes to use. He fights Rafal Kijanczuk (7-0), who will be broken down below.

The 26-year-old Polish fighter brings an undefeated record with wins over quality competition over more experienced foes. He is a legit finisher with all seven wins via KO/TKO and four of them under 20 seconds. He’s very athletic and has very good footwork as he cuts angles and explodes in very well. He hits like a truck and has shown pretty solid cardio as well, so it looks like he is the real deal. He fights the aforementioned Khadis Ibragimov (7-0).

Bagov is a well-experienced fighter at only 28 years of age with 37 pro fights to his name. In those 27 wins, Bagov has beat guys like Bubba Jenkins, Eduard Vartanyan, Leandro Silva, Herdeson Batista, and current UFC fighter Ramazan Emeev. Bagov is totally a grappler/wrestler. He doesn’t have much on the feet, but his ability to close the distance and level-change to get the fight to the mat is quite smooth.

His nickname is “The Hulk” and it suits him well as he is very strong and tough to get away from when he gets ahold of his opponents. Bagov’s jiu-jitsu is slick as displayed by his 22 wins by submission. His submission threats are complimented by heavy ground-and-pound. He fights Khusein Khaliev (19-1), who will be broken down below.

Khusein Khaliev is a fantastic, well-rounded fighter. He has 11 wins by submission, but it’s his stand up that really illustrates his skill. The way he strings together his kicks, including his spinning kicks, in with his combinations is amazing. On the feet, he mainly relies on his kickboxing. He attacks every limb and has the ability to use spinning kicks, which he executes better than most fighters. He has good wrestling but he’s not the guy to pick his opponent up and slam him to the mat. He’s very good at timing his takedowns and getting trips. On the mat, he has excellent control and at times, he has relentless ground-and-pound. The prospect has a good submission base with 10 submissions. He fights the aforementioned Ali Bagov (27-10).

Evgeny Goncharov is another solid heavyweight prospect out of Russia. On the feet, he does have some power, but on the mat is where he wants to be. Goncharov is an excellent wrestler who will get the body lock and get huge power takedowns, showing how strong he is. On top, he has some slick grappling for a big guy, but his ground-and-pound is his best aspect where he throws at a high rate and can do that all fight. He fights Mukhamad Vakhaev (7-4-1), who is good but I think Evgeny gets the win.

Goga Shamatava is a striker at heart. He has good kickboxing and mixes his attacks with body strikes and spinning techniques. He has good, long strikes from a distance, often picking his opponent apart. But in the clinch is where he thrives with excellent Muay Thai. His very dangerous and relentless knees are his best weapon by far. He does need to work on his takedown defense, but he is very sound off his back and has shown good control of his opponent. Offensively, he has good jiu-jitsu and holds five submission wins, and is riding a 12-fight streak. He fights Rasul Albaskhanov (8-3).

Askhab Zulaev is another legit up-and-coming Russian prospect. On the feet, he is excellent at distance using a range of kicks, even spinning kicks, often. The Russian is a skilled kickboxer with explosiveness, falling in love with his flying knee. Some other nice qualities he has are solid cardio with the pace he throws, and excellent takedown defense. Zulaev has some decent wrestling, but his ground and pound is cutting with the elbows he throws. He fights Otavio dos Santos (12-3), who is a big test for Zulaev.

Diego Bianchini brings a Capoeira style on the feet as he throws a lot of switch kicks and spinning kicks. He is very explosive and a human highlight reel as he throws caution to the wind. He has a variety of superman punches, crazy elbows from odd angles, and he is very quick. The Brazilian is also good on the mat. He has slick jiu-jitsu and is dangerous on top or bottom with three submission wins. Bianchini, though, hasn’t fought in two years so he may be rusty. He fights Kevem Felipe (5-2), who is coming off a loss.

Arguably the best female fighter outside the UFC, Angela Lee has very good judo and fights like a vet on the mat. Lee has really good control and can go from position to position easily and has with six of her nine wins by submission. Lee’s grappling is her most advanced aspect, as she has excellent back takes and finishing ability with the RNC but is dangerous everywhere. She even holds a rare twister submission victory. Her striking has been improving a lot and only getting better. She fights Jingnan Xiong (13-1), who will be broken down below.

With Jingnan Xiong, there isn’t much technical ability nor really any defense all around. But what does have is toughness and heavy aggression and that alone has won her the One Championship title. On the feet, she does get wild but her always pressing forward style, throwing constant hooks, really breaks her opponents down as she can take damage to deliver some of her own. Her takedown defense is also an issue that could need some work, but she does scramble well and has never fought off her back too long. Xiong does have decent wrestling and on top, has good grappling and solid ground and pound. She fights Angela Lee (9-0).

Garry Tonon is well-known in the world of BJJ as he holds accomplishments such as IBJJF Pan-American No-Gi Champion, IBJJF World No-Gi Champion, EBI lightweight champion, and much more here. Tonon has looked stellar in his MMA career, and has even looked great on his feet. Tonon uses nice footwork, landing one-twos and landing with a lot of output while moving in-and-out. He showed good wrestling getting double-leg and trip takedowns. The mat is his world, as he finds dominant positions easily and while his ground and pound is very good, he is obviously a big submission threat. He fights Anthony Engelen (8-5), who Tonon should beat. 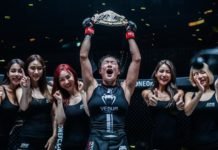