After staying silent for years, long-time Bellator lightweight Saad Awad is ready to be more vocal if all goes well at Bellator 219, saying “sometimes you do got to bark a little bit to get the cat out of the tree.”

In his first main event since a 2013 clash with Will Brooks, Saad Awad is looking, just maybe, to change things up a little. The long-tenured Bellator lightweight is taking on Brandon Girtz at Bellator 219, and coming off a loss to Benson Henderson that snapped a four-fight win streak.

So what is there to change up? Well, for starters, Awad told Cageside Press that his confidence wasn’t what it should have been in the Henderson fight. And that, among other lessons learned, he needs to avoid getting frustrated. “I need to be more confident in my wrestling. I have a solid wrestling base, and I think I let it get to me, that he was getting to my hips so easily,” he explained just a few days ago, with Bellator 219 on the horizon. “I got frustrated, I’ve got to learn not to get frustrated. That’s something that comes with experience. I knew better than that.”

“If I fought [Benson Henderson] again, I guarantee it would be a different fight.”

Of course, there’s something to be said for going three rounds with one of the best lightweights of all time. “We’re all fighters, but he does have the credentials,” Awad put it. “He was a long term UFC champ.”

When Awad was coming up in the local scene in California, his eye was on the UFC standout. Then came the opportunity to get in the cage with Henderson, who had since signed with Bellator despite being on a win streak in the UFC. “When I got the chance to fight him, I knew I was ready, I was well prepared,” said Awad. “I take nothing from anyone or anything in that fight, but being that I got frustrated, there’s little things I knew I was good at that I let frustration kind of mess me up.”

“Just moving forward, now I know what not to do, what I could have done better,” he summed up. “And we’ll see what happens in the next fight.”

The next fight is the Bellator 219 main event, opposite Girtz. The pair are stepping in for Andrey Koreshkov vs. Lorenz Larkin, after Larkin pulled out of the event due to injury (Koreshkov remains, against little known Michael Jasper).

“There’s a reason why I’m in this position. I’m not just a pretty face that has a padded record that they’re building.”

Being in the main event, “it feels good,” Awad admitted, but “end of the day, a fight’s a fight. I’m still fighting whether I’m on the undercard or the main event.” The added exposure, however, “that’s pretty cool.” Especially since, as Awad pointed out, “I’ve been in Bellator a long time, longer than most of the people that work there.”

What he’s more proud of is how he came about his most recent main event slot. “I’m not one of these guys that fought two or three times and they’re headlining shows because Bellator’s building them,” he explained. “I’m one of the guys, you go back and look at my record, I’ve fought everybody. I’ve never turned down a fight. I have good wins, I have good losses on my record. There’s a reason why I’m in this position. I’m not just a pretty face that has a padded record that they’re building.”

Another factor, Temecula, CA is local turf for Awad. “I love fighting here at home. Don’t get me wrong, I love to travel, going to places I would never go to if Bellator didn’t fly me out to go fight,” he told us. “But being at home is dope. I think the last three times I’ve fought here, we’ve sold out the event.”

“Enjoying the ride” is how he put it, with friends and family coming out to support him.

“I haven’t been vocal, and I haven’t got sh*t. Sometimes you do got to bark a little bit to get the cat out of the tree.”

Back to talk of changing things up. If all goes well Friday at Bellator 219, you might just hear the usually soft-spoken Awad say something edgy on the mic. “Possibly man, possibly. Because I haven’t been vocal, and I haven’t got sh*t,” he said.

“Sometimes you do got to bark a little bit to get the cat out of the tree,” he noted. “You might hear me, you might hear me. Depending on how the fight goes and how I’m feeling and what emotion I’m going through at the time.”

But at the same time, it does irk Awad just a little that it’s almost expected that fighters talk trash at this point. “It does because that’s not my style. It’s really not. It wouldn’t get on my nerves if I was a dude who drove a yellow mustang and wore glasses in a dark building and loved the attention of people,” he said. But that’s not him. “I still drive a f*cking Honda. I could afford a really nice car if I wanted, but I drive my Honda. I had my last payment this month. I’m happy with that. I have tinted windows, nobody sees who I am. I don’t even let people know who I am.”

“I don’t tell people I fight, if they don’t know I fight, good. It’s better that way,” he continued. “Because I don’t need them treating me a special way because they think ‘oh he fights on TV, let me be nice to this dude because he’s cool.’ Nah, f*ck that. I’m just like everybody else, we’re no one special.”

One of the problems with MMA currently, as Awad sees it, is that “you get these guys that come out that love the spotlight, that want the spotlight, they crave it. It’s unfortunate for guys like me, because those are the guys that get the easier fights, that get put in the spotlight, that get paid more. You know why, because attention gets crowds, and that’s what they’re getting, is attention.” However again he reiterated that “it’s just not in my character. I almost wish it was, just because I know I’d be making a lot more money right now. With my fighting style, if I was a sh*t talker, if that was me. But it’s not me. So it’s unfortunate, but it is what it is. I like who I am, and I don’t need to change for anybody.”

If he’s fired up naturally, however, that’s another story. And it sounds like he just might be Friday, even though he’s fighting a man he respects in Brandon Girtz.

“We were actually scheduled to fight right before I fought [Ryan] Couture,” Awad recalled. However, the promotion needed someone to fight Michael Chandler, and Girtz got the nod. “Now here we are. We both knew it was going to happen, just because of our fighting styles, just because we’ve both been in Bellator so long.”

“He’s a cool dude. I actually like the dude,” Awad said of his opponent. “There’s not too many lightweights I give a sh*t about, because they’re all in my division, I know we’re going to fight eventually.” As a result, Awad tends to go his own way, keeping pleasantries to a minimum with other fighters in his weight class. “But for some reason me and Girtz, we became cool. We don’t really know each other, but we became cool. He’s a cool dude, it’s unfortunate we have to fight, but it’s a fight that the fans are going to want to see, and it’s a fight that I think is going to bring a lot of attention to both of us.”

Awad is expecting fireworks, because Girtz has his back against the wall and will likely come out looking to make a statement. “When I’ve had my back against the wall,” he said, “I’ve had my best performances. I’m really expecting him to go out there and do the same thing, because he fights the way I fight. He fights on emotions too, he gets hit, he wants to hit back.”

As to where a win over Girtz puts him, who knows. Awad certainly doesn’t. “I was on a four fight win streak, and I don’t even know where it put me at that time. The only people really talking about title fights was the interviews,” he revealed. “Nobody really brought it up to me. I’ve asked Bellator, it’s kind of like ‘oh you’ve got Patricky, he’s on a three fight win streak too.’ Now he’s on a four fight wins streak, so obviously he should be next. But look what they did, they gave it to his brother. So I don’t know, man. I really don’t know. All I know is I’m going to go out there and fight the way I know how to fight. And that might give me a reason to finally talk some sh*t and see what comes out.” 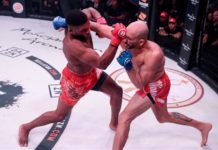