Curtis Blaydes put on a wrestling clinic as he ground down Justin Willis in the co-main event at UFC Nashville on Saturday.

With things heating up at Friday’s weigh-ins, Curtis Blaydes vs. Justin Willis promised to be a thriller. With Willis making it personal (“Daddy can’t help you,” he remarked, with Blaydes’ father shouting from the back of the room), Blaydes would likely be extra motivated to do some damage — but might it throw him off his game in their UFC Nashville co-main event fight?

Early on, Blaydes looked cool and collected. He stayed outside, firing a leg kick. When an opening presented itself, he closed the distance, driving Willis into the fence then powering him down. Takedown secured. Blaydes began moving towards mount and Willis had to risk giving up his back to avoid that. The only saving grace for Willis was that he trapped his opponent’s leg, but he was still in a horrendous position. Willis made it to one knee, but Blaydes was controlling, adding some knees to the thigh, and then came the suplex that slammed Willis back down.

Willis looked out of his element laying against the cage, and while Blaydes was yet to unleash any of his razor-like elbows, he was in the driver’s seat.

Round two saw a heavy right hand land for Blaydes, and Willis was wobbled. Willis escaped to the cage, but Blaydes caught him and dumped him to the canvas. Willis was once again at risk of being mounted. He’d continue to survive, and do nothing else. You’d be forgiven for struggling to remember if Willis had gotten off any offense throughout the fight. As Willis struggled back up, Blaydes dragged him down again. Willis would finish the round wearing Curtis Blaydes like a blanket.

The third round had Willis needing a finish, but whether he had any means of obtaining that finish was another matter. The pair exchanged early, allowing Willis to finally let his hands go, but nothing landed flush. Willis went high with a kick that was blocked, while Blaydes switched stances. Blaydes was stuffed on a takedown, but muscled his opponent to the fence moments later, hoping to finish the sequence with a single leg takedown. He wouldn’t get it there, but back in the center of the octagon he’d score one more takedown, to underscore the one-sided, grinding, dominant wrestling clinic he was putting on.

After the fight, he told UFC broadcaster (and heavyweight champ, of course) Daniel Cormier that he wanted one of Junior Dos Santos, Derrick Lewis, or Stipe Miocic next. 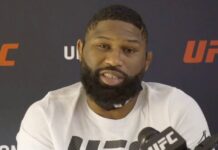