Everyone, from Cyborg to Mark Hunt to Ben Askren to Kamaru Usman was watching when Anthony Pettis moved up to welterweight to take on Stephen Thompson.

They were not disappointed. The main event of UFC Nashville explored what might have if you paired up flash versus flash. Speed versus speed. Creativity versus creativity. Stephen Thompson against Anthony Pettis was either going to be a brilliant striking clinic, with two of the best putting on a show on the world’s biggest MMA stage, or they’d cancel each other out. Fans were hoping for the former. They got just that.

The UFC Nashville main event was, in a word, brilliant.

One key factor in the fight, of course, was Pettis moving up in weight. ‘Showtime’ was a former lightweight champion in both WEC and the UFC. ‘Wonderboy’ had spent his UFC tenure at welterweight, and was a tough test for anyone debuting in the weight class. But Pettis turned out to be up to the challenge, after some early setbacks. He was bloodied in the first round. Some high kicks were sneaking through.

Yet Pettis also managed to chop away at the legs of ‘Wonderboy.’ And then, in an instant, he switched things up, fired off a superman punch, and dropped Thompson for the knockout win.

Wow! It was dangerously close to a ‘Showtime Punch’ though replays showed Pettis did not push off the cage. Still, a highlight reel finish that had everyone talking. See how the pros, including Cris Cyborg, Mark Hunt, Kelvin Gastelum, Ben Askren and others, reacted below.

I've trained with Wonderboy and he is the perfect opponent to blunt Pettis at 170-lbs. #UFCNashville pic.twitter.com/i5tzIvBeYK

Does Pettis have a tat of @neiltyson on his arm?

Oh shit this just got fun

Unbelievable! I was in awe still am! @Showtimepettis with the Superman KO #UFCNashvillle

Another one for the highlight reel for @Showtimepettis. Cold

Showtime is back and it’s not in LA! 🔥 @Showtimepettis #UfCNashville

Woooooowww that’s the beauty of the sport!! You NEVER know what’s going to HAPPEN! What a crazy fight and KO #UFCNashiville

This is what happens when you fight in 4 oz gloves the best fighter don't always win.

Showtime with the superman punch to turn it around.. Just wow… #UFCNashville https://t.co/TnvDEaG4wL

Pettis vs Masvidal next #UFCNashville

I know everyone wants to challenge @TheNotoriousMMA , but I always thought him vs @Showtimepettis would be freaking awesome. 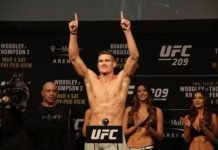 UFC: Stephen Thompson vs. Geoff Neal Being Finalized for December 19