UFC Nashville’s weigh-ins went down on Friday morning, with a big question mark heading in being the cut of Luis Pena, a.k.a. Violent Bob Ross, dropping to featherweight.

The UFC headed south to Nashville, TN on Saturday, which meant that Friday morning, the promotion hosted the event’s official weigh-in. While the main event felt like a safe bet as far as weight was concerned, there’s always a couple of fights on each card bound to have fans wondering. For more on that, check out our own Bryson Hester’s ongoing Weight Cutting Chronicle Series.

This time around, the big question was no doubt going to be Luis Pena, cutting to featherweight after competing at lightweight on The Ultimate Fighter 27. Maycee Barber, meanwhile, was going up to flyweight after competing as a strawweight, and putting her body through an incredibly stressful process to do so.

With no struggle to make weight, headliner Pettis stepped on the scales early, hitting 171. ‘Wonderboy’ Thompson, meanwhile, came in about 30 minutes later at 170.5, making the main event official! As expected, however, Luis Pena struggled with the drop to 145, coming in at 148.5 as he took the scale.

All other fighters made weight for Saturday’s event.

The early weigh-in for UFC Nashville will kick off at 9AM local time. Check below for results. 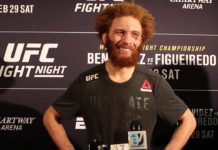 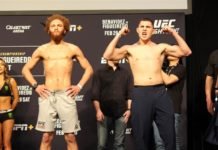 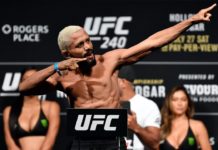