After looking at the success other wrestlers have found in Bellator MMA, ATT’s Johnny Eblen is looking to follow suit, starting at Bellator 218.

Middleweight Johnny Eblen is another solid talent signed by Bellator MMA, something of a trend of late. The promotion has been signing up a large stable of prospects, and in the past couple of years several have blossomed into stars for them, including Aaron Pico, Logan Storley, Ed Ruth and others. Names like Joey Davis, the Fortune brothers, etc. are on the brink of breaking through.

It’s still early, but Eblen, a perfect 4-0 thus far in his career, could some day make the list. We spoke to the Missouri native and ATT fighter ahead of his debut at Bellator 218.

“It took a little while,” said Eblen in regards to signing with Bellator off yet another finish in the regionals. Eblen had planned on taking some time off after his Shamrock FC win against Tyler Lee, and did just that over the holidays. “Shamrock was trying to get me on another card around the same time [as his eventual debut]. Talked to King Mo, who obviously works with Bellator, he got me in contact with Bellator, and we ended up working out a deal. So here I am.”

The deal is a six-fight, two year contract for the NCAA Division I wrestler from the University of Missouri. A big step for a wrestler for whom MMA was almost an afterthought.

“MMA was actually never in my radar while I was wrestling,” he told Cageside Press. “It came about after my senior year. I moved to Florida. I really just took a year off, I thought I was never going to compete again.” Eblen had moved to Florida for work, but while there, eventually hooked up with Steve Mocco, who in turn got him in touch with American Top Team.

“It’s been amazing. They’ve really helped me out,” he said of ATT. Calling them the best gym in the world, Eblen said “they’ve treated me like family.”

“The hardest thing was probably the striking, that took about a year,” he added of the transition from wrestler to mixed martial artist. “Now, I’m pretty comfortable with my striking. Still working on it. Still working on my grappling as well, but obviously, my learning curve with grappling was very, very high.”

He’s also aware of where his bread and butter lies. “I always try to stay honest, keep my wrestling game strong.”

Despite a strong start to his career, with three wins via submission to strikes, Eblen isn’t feeling any pressure heading into his debut for Bellator. “If I see an opening, I’m going to take it. Some of those finishes I thought were just TKOs, and the ref stopped it a little late.”

He expects more of the same success with Bellator, who have been turning wrestlers into stars. “I actually looked at those guys [Pico, Storley, etc.], and saw the fights that Bellator was giving them, saw how they worked with them, and I approved of it. I liked it, I like how they do business. When I did get the deal, it was a done deal for me.”

The deal begins in Thackerville. “I think he’s a pretty damn good fighter. Definitely comes out to scrap. Doesn’t give up,” Eblen observed of opponent Chauncey Foxworth. But that said, “I’m going to make a statement.”

Which includes finding a finish. “I can’t tell you exactly what’s going to happen,” Eblen said, “but I’m definitely going to get a finish. Whether it’s a submission, a KO or a TKO, it’s going to happen. Don’t know which round, just depends on when I see an opening.”

Johnny Eblen takes on Chauncey Foxworth on the preliminary card of Bellator 218. The event takes place live at the Winstar World Casino and Resort in Thackerville, OK on March 22, 2019. The preliminary card streams live right here on Cageside Press! 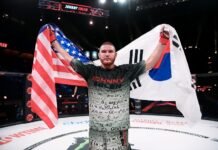 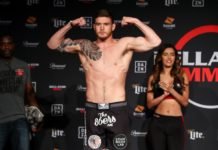 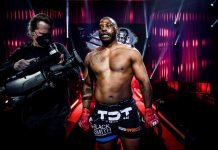 ONE Championship: Battleground’s Victoria Lee Reveals When She Knew MMA Would Be Career