Wichita, Kansas — The Black Beast is in town for UFC Wichita, back for his first fight after losing a title challenge at UFC 230 against champ Daniel Cormier. The loss didn’t do much the harm Lewis’ stock. Like Nelson and Hunt before him, the popular heavyweight’s punching power makes him beloved to fans. A loss? That’s okay. There will be more knockouts to come.

Having said that, on Thursday, Lewis addressed the media, and admitted that “this week’s been weird, actually.” For some reason, he explained to media outlets including Cageside Press, “it don’t even feel like fight week. Don’t even feel like I’m fighting Saturday.”

He’s not too sure why, adding that “I guess I’m just too relaxed right now.” Whether that is good or bad for his fight against Junior Dos Santos this weekend, “we’ll see Saturday,” he said. “I never felt like this before during fight week, so we’ll see.”

His weight cut is on point, and in his usual range. “Really I had to cut like, twenty-eight pounds. But I’m good,” he said on that subject.

There are no distractions either. Lewis has become beloved for two things, his post-fight interviews and social media presence. He feels no pressure, however, to keep things going online during fight week.

“Not really. I really don’t care about social media,” he claimed, though with Lewis you can never be sure. Later, he’d refer to himself as “okay” at it. This from a fighter with over a million followers.

He recalled posting a clip of a man falling head first onto concrete while jumping into a swimming pool. When he deleted it, thinking it a little too edgy, he claims UFC President Dana White reached out, asking where it went. So he sent White the clip. “It probably got flagged on his page though.”

When it comes to his sense of humor and off the cuff remarks, Lewis did admit it’s mainly because he’s not a big fan of media. “I get tired of answering the same questions, you’re all asking the same questions over and over, so I just say whatever I want. Whatever comes to my head.” Turns out, that’s all it takes to create some of the most memorable media moments in the UFC.

It might not be too much longer that UFC fans get to enjoy Lewis’ talents, however. “Just know that this year right here is more than just an investment year for myself. I’m investing in a lot of companies and businesses and stuff like that. So we’ll see how things go.”

Rather than a set financial figure, Lewis wants to hit a point where his investments are “making five figures a month.” After that, who knows how long he’ll stick around. 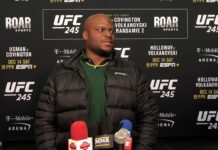