Cedric Savage, a former kickboxer, is making his push in MMA at light heavyweight. We spoke to the undefeated prospect.

6-0 as an amateur and now looking to improve to 3-0 as a pro, Cedric Savage takes on Alex Polizzi this Saturday for Chosen Few FC 16. Get to know Cedric “Big Dawg” Savage.

Shawn Bitter: First of all, how did you get into MMA?

Cedric Savage: I was in the Navy and wanted to change it up. So I started taking a couple of classes here and there, eventually getting addicted to the sport.

SB: Where were you born and currently where are you living?

CS: I was born Ft. Polk, Louisiana. I just moved out here to Wisconsin from
Virginia Beach.

SB: Can you speak about your kickboxing career like when you started, how long you done it, record, and are you still competing in it today?

CS: I started learning Muay Thai around 2012. My last ammy bout was in 2016 I think. I started doing a bunch of smokers the same year I started. Then some bouts in Mexico and Virginia. Three in Muay Thai, two in kickboxing, no losses, and now I’m in MMA. I wouldn’t mind revisiting the thought in the future though.

SB: Who are you currently training with? Who are some of your main sparring partners?

CS: I’m training at Roufusport. This gym just breeds animals out here.
You end up training with everybody one way or another, getting different feels. I’d say I’ve gotten most my rounds from in with Gerald and Dexter.

SB: How is the weight cut to 205? What is your diet plan? What do you usually walk around at?

SB: List of accomplishments such as titles, belt ranks, etc.?

CS: I’m a brown belt in BJJ, I got ammy titles in kickboxing and MMA ranging from middleweight to heavyweight. And I like to compete in BJJ tournaments as well.

SB: When you competed in Glory did you ever feel you will take the path in kickboxing more so than MMA?

CS: I did at one point, but then I realized I had a Brazilian Jiu-Jitsu habit I couldn’t kick [laughs]. Pursuing professional kickboxing isn’t a good idea unless that’s all you’re focusing on. 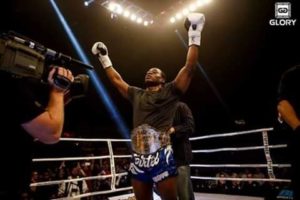 SB: You’re fighting Alex Polizzi. What do you think of him as an opponent and how do you feel you match up? Any prediction on the outcome?

CS: He looks like a tough guy. Someone I’m really going to have to work to get the win. I’m looking for my hand speed to be the difference and taking him out in the first

SB: Has it crossed your mind that this fight could be a qualifer for the Contender Series?

CS: I mean you’re always looking at the opportunity to make better money and fight more often. I just figure if I make enough noise the right way I’ll get my fair shot.

SB: What is the meaning behind the nickname “Big Dawg”?

CS: I don’t know. No real meaning. Random people who didn’t know my name would call me Big Dawg a lot more than you would expect [laughs]. I was filling out pre-fight paperwork at Tuff-N-Uff. Got to the nickname part and one of my coaches just called me that name again so I just said f**k it.

CS: I fight because its an interesting way to challenge yourself. Plus there’s something about going to meet someone who’s trying to punch you in the face.

CS: XBOX until they ruined Fallout and Fable.