Zabit Magomedsharipov faced a step up in competition at UFC 235 in the form of Jeremy Stephens. After the win, post-fight, he said he’s ready for Max Holloway, calling him a good match-up stylistically.

Las Vegas, NV – Zabit Magomedsharipov proved he was the real deal at UFC 235 by defeating tested veteran Jeremy Stephens with a sound performance over 15 minutes. The Russian was involved in a tense build-up to the fight, and it boiled over into some extracurricular activities at the end of the second round. After Zabit stood up from top, there was a little shoving exchange. But nothing to worry about, the rising featherweight star said post-fight.

“When you fight, sometimes you don’t hear the bell. So maybe things got a little heated, there was tension, but it’s all emotions in there. Overall, it’s ok,” Zabit told journalists including Cageside Press backstage following his UFC 235 victory.

On tension with Stephens, he added that “there wasn’t much going on. He was posting online on social media saying this and that. There was nothing personal, he did well. It’s all for interest, to hype up the fight I think.”

Still, weigh-ins were tense. “To be honest, I don’t remember exactly what he said, there’s a lot of noise in there. I think it was something like, ‘What’s your name? Where are you from?’ Something like that.” There is little question that Stephens knows Zabit Magomedsharipov’s name now.

The Dagestani-Russian fighter broke out all his tricks against Stephens: spinning attacks. A showtime kick. Overall, he was happy with how the fight played out, he said. “In general, I’m very happy with my performance. I’m 5-0 now and the last fight was a good performance against a top opponent so I’m happy about my performance. I needed this win.”

“I knew Jeremy was a tough opponent from the beginning,” he continued. “He’s top six. I was ready for everything. I had a good camp for three months back home in Dagestan. My coach Mansur Uchakaev and other coaches back home helped me a lot. Then I came to the US for a month and a half. The coaches here, Mark Henry and Ricardo Almeida, did a lot of work so we approached this fight with a lot of preparation.”

“I am ready either for my next fight to be for the title or to fight the winner of Jose Aldo vs. Alexander Volkanovski.” And if you think that’s shooting high, Zabit would beg to disagree.

“My personal opinion on Max Holloway is that 155 is a bit of a tough test for him. His natural weight division is 145, I think he’ll come back to 145.” And when ‘Blessed’ does come back down, “I’m ready, and as I said earlier, I’m ready for Max Holloway. He’s a good opponent for me stylistically, so he’s a good match-up for me.”

“Of course, I’m going back to Dagestan in a few days. Then it will be the same routine. Go back, train for my next opponent at home, then back here two months in advance to work with the coaches here. I like working here, my second home is here.”

While fellow Dagestani and UFC lightweight champion Khabib Nurmagomedov has been vocal about not fighting in Vegas, Zabit is of a different mind. “It’s very convenient for me to fight in Vegas because my manager lives here. The Performance Institute is here. They treat me well here,” he said Saturday, “so everything is at the highest level. Without a doubt, Vegas is a good place for me to fight. All the conditions, everything is top-notch and high-end.” 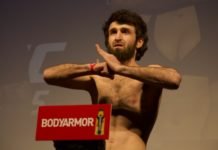