The UFC unveiled the remainder of it’s second quarter 2019 schedule during the UFC 235 broadcast on Saturday.

During Saturday’s UFC 235 broadcast, the promotion revealed more details on its second quarter schedule. Among the revelations, a Rochester, NY show in May, as well as Greenville, SC and Minneapolis, MN in June. Another interesting twist, International Fight Week, in the first week of July, currently only has a single event, UFC 239.

The crown jewel of the UFC schedule, International Fight Week generally has two or three events, often including an Ultimate Fighter finale. However, the show’s future is currently in limbo.

Also on the schedule, previously announced dates in Ottawa, Ontario in Canada and Stockholm, Sweden. News of the Swedish show was announced earlier in the day on Saturday, ahead of UFC 235.

The Rochester show, on May 18, is set for the Blue Cross Arena, and will be an ESPN+ event. It will be the UFC’s first trip to the city, as it continues to target New York, having visited Buffalo, Albany, Utica, and Long Island in addition to New York City. The card, for those keeping count, will be UFC Fight Night 151.

The show in Greenville, SC will also air on ESPN+. Numerically UFC Fight Night 153, it takes place on June 22 at the Bon Secours Wellness Arena. Minneapolis, MN meanwhile will play host to UFC on ESPN 4 on June 29. That will be the final event before International Fight Week. UFC 239, of course, will be back at the T-Mobile Arena. 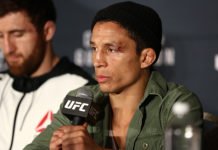