As the smoke has cleared following UFC Prague, the promotion’s debut in the Czech Republic, we take a look at a fun night of fights, and what should be next for those involved — including main event winner Thiago Santos.

With a rousing night of fights in the books, the fighters from UFC Prague will be looking forward to the next fight. For those that won, they look to continue the rise to the top. For the fighters that were on the wrong end of the fight, a rebound. Let’s take a look at what could be next for a few of our fighters.

Petr Yan is the bantamweight division’s hottest contender. After the Russian’s defeat of veteran John Dodson, Petr Yan moves to 4-0 in the UFC since joining in June of 2018. While constantly bringing forward pressure and staying composed the whole fight, despite being knocked down once by Dodson, Yan cruised to a unanimous decision. Yan will continue to look for tougher opponents as his rise continues.

Dodson, on the other hand, showed signs of age. He didn’t look quite as fast as he normally does. That said, John Dodson still has a lot left in the tank. Since losing to Demetrious Johnson at UFC 191, Dodson has moved up to the bantamweight division and gone 3-4. Maybe it’s time for Dodson to return to flyweight now that there’s a new champ for him to go at it with.

Next for John Dodson: Thomas Almedia at bantamweight, Magomed Bibulatov at flyweight

Liz Carmouche continues her run to a title shot

Liz Carmouche continues her career turnaround at her natural weight class. After a close split decision loss to Alexis Davis in her debut at flyweight, she has rattled off two straight wins. While Carmouche may be one win away from a title shot in the UFC’s eyes, she does hold a win over current champ, Valentina Shevchenko. One more win would put her in striking distance of another shot at UFC gold.

Pudilová showed she can compete with the division’s best. While Carmouche may have been too much, Lucie will learn from this fight. Her next fight should be a ranked opponent again. A win there would establish her place in the division.

Michał Oleksiejczuk gets his first official win in the UFC. After beating Khalil Rountree Jr. then popping for clomiphene, an estrogen blocker banned by USADA, Oleksiejczuk notches his 10th straight win. He looks to continue his streak after giving us the beautiful liver shot on Gian Villante. Let’s just hope he can stay out of USADA’s cross hairs.

Gian Villante fell to 17-11 and 7-8 in the UFC. Villante has been around since Strikeforce and light heavyweight is trying to keep contenders. Look for the UFC to keep Villante around for another scrap. Hopefully his career can bounce in the right direction.

Stefan Struve goes out on a high note

Stefan Struve has been a long time staple of the heavyweight division in the UFC. Making his debut in 2009, “The Skyscraper” is well known for his height. Struve threw the gloves down in the octagon and called it a career following UFC Prague. If it is the end, he has plenty to be proud of, as he has notched wins over “Bigfoot” Silva, Stipe Miocic, Big Nog, and Pat Barry. Congratulations to Struve on a great career!

Marcos Rogério de Lima, on the other hand, looked great in the first round before Struve had him locked down. A big power shot put Struve down and had Struve in do-or-die mode. de Lima will look to set himself back up and find his place in the UFC after yo-yo’ing wins and losses.

Next for Stefan Struve: A long vacation on a beach in Tahiti

Thiago Santos claims the next shot

Thiago Santos fought at 170. Remember that? It seems as if “Marreta” has found his place in the light heavyweight division. Since moving up to 205, Santos has rattled off three straight wins against Eryk Anders, Jimi Manuwa, and now Jan Błachowicz. Santos is in prime real estate to get the next crack at the light heavyweight title. While he has a win over current challenger, Anthony Smith, more people are expecting Jon Jones to be the one coming out on top to take on Santos next. The timeline is perfect, with the fight being this weekend, it won’t be long before Santos knows if he’s fighting Smith or Jones.

Błachowicz was on an absolute tear in terms of the light heavyweight division. Four straight wins, but now Błachowicz sees his title aspirations come to a pause while Santos takes his spot. Błachowicz has improved greatly in recent times and he will look to continue to improve to get a shot at the title after Santos gets his. While UFC Prague was a setback for Jan, it’s not the last we’ve seen of him.

Thanks for reading! Who do you think is next for the fighters in Prague? Sounds off below! 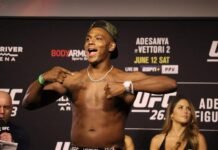