CJJFN, the latest from the Eddie Bravo Invitational, saw Beatriz Mesquita pick up an impressive win, which could be one of her last before switching focus to MMA.

Los Angeles, CA — Beatriz Mesquita was part of the Eddie Bravo Invitational’s Combat Jiu-Jitsu Fight Night 1 on Friday, taking part in a super-fight against Kayla Patterson. For those not in the know, combat jiu-jitsu adds in palm strikes while competitors are on the ground, though no stand-up striking is permitted. It’s a unique twist, and one that could help ready BJJ athletes to make the jump to MMA.

Mesquita, who won her match against Patterson via arm-bar, certainly sees it that way. While the added strikes “didn’t change a lot of my jiu-jitsu game,” she told Cageside Press following the win, it certainly did give her pause when she first accepted the match. And moving foward, MMA is in the cards.

“I thought about it a lot. Especially in the beginning, right when I got the fight, to train, a lot of holding the arms, to defend myself, and just attacking the right moment,” she explained. While other competitors were excited, “like ‘yo we can slap,’ and they wanted to try to throw everywhere,” Mesquita recognized that “it’s not the right thing to do. You’ve got to get good positions, and then get the right situation to strike.”

As for MMA, “that’s my next step. I accepted this fight because I wanted to try something a little step-by-step.”

“Definitely it’s a good transition for MMA, it’s right in between,” she said. “It’s kind of like, you don’t have striking while standing, but you have these slaps on the floor. Something that’s striking, you know. So, it feels like it can improve my came to step to MMA.”

“I’m really happy to be here tonight, and do this next step level to my career.” There’s likely a Gi tournament to finish her Gi career this year, then the transition to MMA full time moving forward. 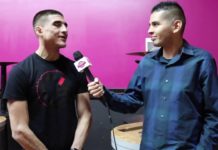 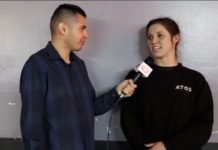