The UFC announced a total of seven fights for UFC 236 through a press release today.

After starting his Octagon career at 7-5, Ovince Saint Preux went on an impressive run of three-straight stoppages, including two rare Von Flue chokes. He earned a pair of Performance of the Night bonuses. Since then, OSP has sandwiched a win over Tyson Pedro between losses to Ilir Latifi and Dominick Reyes.

He’ll face Nikita Krylov in a rematch of a 2014 fight that OSP won by his patented Von Flue choke in the first round. After that bout, Krylov stopped his next five opponents and was considered a top prospect at 205. His run was ended by Misha Cirkunov, and he elected to fight in Russia afterward, winning the FNG light heavyweight championship before returning to the Octagon last year and falling to Jan Blachowicz.

Eryk Anders will battle Khalil Rountree in a matchup of light heavyweight bruisers. Anders is looking to snap a two-fight losing streak that brought him to 3-3 in the Octagon. Two of his wins are by brutal knockouts. Rountree is a former Ultimate Fighter finalist who is also 3-3 in the UFC. Rountree has knockouts in all three of those victories, including one over kickboxing legend Gokhan Saki.

UFC 236 will take place on April 13 inside the home of the Atlanta Hawks, State Farm Arena, in Atlanta, Georgia. In addition to the four aforementioned fights, the following bouts were also made official: 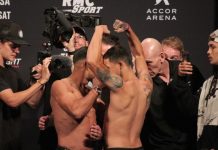