Little Nog (Antonio Rogerio Nogueira) will take on Ryan Spann later this year at UFC 237, according to a new report from Combate.

Brazilian legend Antonio Rogerio Nogueira isn’t calling it a day just yet. The 42-year old light heavyweight and twin brother of former UFC heavyweight champ ‘Big Nog’ Antonio Rodrigo Nogueira will return at UFC 237 this May. The card, which takes place in the city of Curitiba in Nogueira’s native Brazil, will see ‘Minotouro’ take on Ryan Spann. Combate was first to report the news.

Nogueira (23-8) is 2-1 in his past three bouts, and will be coming off a win against ‘Smilin” Sam Alvey when he enters the cage at UFC 237. Little Nog, as he’s commonly referred to by MMA fans young and old, holds notable wins over Tito Ortiz and Rashad Evans in the UFC, as well as Alistair Overeem (twice!), Dan Henderson, and Sakuraba in Pride.

Nogueira’s resume reads like a who’s who of the light heavyweight division, but he never managed to earn a title shot in the UFC, after hitting a skid in 2010-2011 with losses to Ryan Bader and Phil Davis.

Spann (15-5) is a veteran of Dana White’s Tuesday Night Contender Series, and is currently on a five fight win streak. He scored his latest victory in his UFC debut at UFC Sao Paulo in September. Apparently, he enjoyed winning in Brazil enough to make the trip a second time.

UFC 237 takes place May 11 at the Arena da Baixada in Curitiba, Brazil. 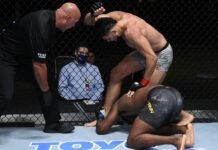