Per Benoit Beaudoin of RDS and confirmed by Ariel Helwani of ESPN, former UFC welterweight and middleweight champion Georges St-Pierre is set to officially announce his retirement from the sport of mixed martial arts on Thursday at a special press conference at the Bell Centre in Montreal. St-Pierre had been hoping to secure one last super-fight with current UFC lightweight champion Khabib Nurmagomedov, but instead will not be returning to the sport as the fight fails to materialize.

St-Pierre had not fought since 2017 when he defeated Michael Bisping to win the UFC middleweight championship. He subsequently vacated the title and would not commit to an Octagon return, confirming speculation that he was looking only for the biggest fights possible and would be willing to call it a career should they not happen. With Nurmagomedov’s current suspension and the interest in a fight between he and Tony Ferguson, it was made clear that the fight against St-Pierre would not come to fruition. 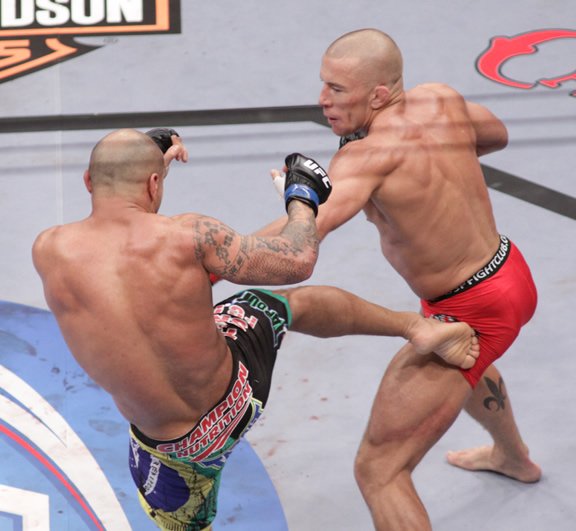 Known around the world as “Rush” and “GSP,” St-Pierre leaves the sport as arguably the best mixed martial artist of all-time. From 2008 to 2013, he became the most successful welterweight champion in UFC history by winning and defending the title a total of nine times. Throughout several years in that span, he unanimously never even lost a round on the judges scorecards. Following a hiatus from the sport, his return after four years to win the middleweight championship made him one of only six fighters to have ever win a world title in two different weight classes in the UFC. He had only two losses in his career, to Matt Hughes and Matt Serra, and both were avenged in dominant fashion in rematches.

What set St-Pierre apart during his reign is that he was arguably the best fighter to combine athleticism with an elite, multi-faceted skillset. His blend of striking, wrestling, and jiu-jitsu led to 26 victories in his career. Inside the cage, he will best be remembered for his incredible takedown abilities. Whether against high-level wrestlers or dangerous strikers, St-Pierre’s consistency in being able to get opponents to the ground and maintain top-position for the entire fight was prolific.

Throughout his reign as welterweight champion, he took on a murderer’s row of opponents. He defeated then lightweight champion BJ Penn, surging contenders Thiago Alves and Josh Koscheck, former Strikeforce champion Jake Shields, interim champion Carlos Condit, and future welterweight champion Johnny Hendricks. What’s more, he came back from ACL surgery and a year-long layoff to overcome Condit in their bout. This is coupled with the arguably more impressive four-year absence prior to defeating the aforementioned Bisping at middleweight.

There were several fights that did not happen for Georges St-Pierre. Chief among them, a fight with longtime middleweight champion Anderson Silva. While the two are often debated by fans on who actually stands alone as the best ever, a fight between the two never happened despite interest from the UFC and fans. After a close split-decision victory over Hendricks in 2013, many figured a rematch was imminent but instead St-Pierre chose to leave due to the desire for more stringent drug-testing of UFC athletes. There was then hope that St-Pierre would be enticed to come back as champions like Robbie Lawler, Ben Askren, and Tyron Woodley went on to dominate the welterweight division, but he leaves the sport without those fights ever occurring as well.

His legacy on the sport is that he is one the greatest ambassadors it has ever had. He helped to popularize the sport in his home country of Canada and became one of the biggest pay-per-view draws in the history of the UFC. All of it without having ever had a hint of controversy in his professional career. He continues to train and work with athletes with his team at Tristar, including current Bellator welterweight champion Rory MacDonald.

Georges St-Pierre set the standard at a time when MMA was growing from niche to mainstream. He leaves the sport on top and managed to do it twice by coming back from after four years for an encore performance in 2017. Only the best-ever could pull off a feat like that.