The bantamweight division will have a definitive number one contender after Saturday night as Marlon Moraes takes on fellow top contender Raphael Assuncao at UFC Fortaleza.

The UFC bantamweight division has been plagued by an unusual set of circumstances in the last 16 months. A pursuit of the flyweight title for TJ Dillashaw led to an unexpected rematch with Cody Garbrandt at 135 and most recently a failed bid to win a second belt against Henry Cejudo. The wait for a shot at gold has led to top contenders Marlon Moraes and Raphael Assuncao putting their spot in the rankings on the line as they collide in the main event of UFC Fortaleza.

“Magic” Marlon Moraes for many years was the best-kept secret at 135 pounds. In 2012, he burst onto the scene with a victory over former WEC kingpin Miguel Torres at the inaugural WSOF show and went on to have 11 fights in the company that included winning the bantamweight title and defending it five times. His reputation as one of the most multi-faceted athletes in the lighter weight classes quickly made him one of the top prospects not fighting in the Octagon.

Training out of New Jersey with the likes of Frankie Edgar, Moraes entered the UFC on a 13-fight win streak with high expectations. He was given a stern test in his promotional debut, drawing perennial contender Raphael Assuncao and losing a competitive contest that ended his hopes of a quick route to the title. He has since bounced back in spectacular form, defeating John Dodson and scoring brilliant first-round knockouts of Aljamain Sterling and Jimmie Rivera. The latter was expected to lock in a title shot, but TJ Dillashaw’s flyweight pursuit has led to Moraes’ being on the shelved since last June.

Raphael Assuncao has quietly accumulated one of the best bantamweight records in the UFC over the last several years. After struggling at 145, Assuncao made the drop to bantamweight in his second UFC bout in 2011 and has put together an impressive 11-1 mark since then. In 2014, he was riding a six-fight win streak that included a victory over current champion Dillashaw and was linked to a fight with then-champion Renan Barao. In a twist of fortune, an injury to Assuncao led to Dillashaw stepping into the fight with Barao and going on to become champion.

The biggest reason Assuncao is not held in higher regard is the fact that he went absent at a critical juncture. While Dillashaw defended the title twice and recovered from a broken rib, Assuncao was recovering from injury and did not fight for a year and a half through 2016. Also in that span, Dominick Cruz regained the title and Cody Garbrandt ascended into title contention. Furthermore, his return in 2016 was spoiled as he dropped a rematch to Dillashaw in a high-profile bout at UFC 200.

While he has been overlooked in lieu of the bigger names that comprise the division, Assuncao has been active since losing to Dillashaw, putting together a four-fight win streak that includes the win over Moraes. If he can get another win over his fellow countryman, he would be the clear contender at 135 and have the storyline of a rubber match with Dillashaw with the world title on the line.

Stylistically, Moraes and Assuncao are evenly-matched in the diversity of their abilities. Their first meeting was dictated by Assuncao being able to accurately counter and slow-down the more aggressive Moraes to edge out a split decision. In the rematch, Moraes must work more behind the jab as Assuncao found several openings when “Magic” was looking to load up with more powerful shots. Using the jab will allow Moraes to utilize his speed advantage to get in-and-out. Moraes used his diverse attack to great effect in the first fight and making the necessary adjustments will make him even more effective.

For Assuncao, the key is to be the aggressor and get his shots off first. He is more plodding compared to Moraes and he should come forward and not allow his opponent the space to load up on his shots. Assuncao has proven himself to have exceptional durability and figures to be able to hold his own in the face of Moraes. Making the former WSOF champion fight off his heels will give Assuncao his best route to victory as it will slow down the most dangerous part of his opponent’s game.

The winner will wait to see how the bantamweight title picture plays out. The most profitable fight to make currently is flyweight champion Henry Cejudo moving up to rematch Dillashaw for his own shot at becoming a two-division champion. If that is the case, either Moraes or Assuncao will be forced to wait on the sidelines. However, there is the possibility that Cejudo faces Joseph Benavidez at flyweight while Dillashaw fights Saturday’s winner before another champion vs. champion bout possibly takes place. 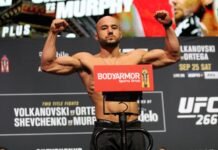