How’s that for a feel-good moment? Bellator 214 kicked off with a big win from Adel Altamimi, who is on his way from a near-death experience with extremists to MMA stardom.

At Bellator 214, Iraq’s Adel Altamimi had the opportunity to, if not complete, take a huge step in an incredible, harrowing, and tragic journey. From terrorist hostage and nearly being killed, to fighting in a major MMA promotion. His story is well worth a read if you’re not familiar with it, but in short, Altamimi escaped a war zone to move to America and pursue life as a fighter.

Walking out with none other than Chris Pratt on Saturday, the spotlight was on Altamimi. The featherweight, with a karate background, started the action in the familiar sideways stance. After trading some kicks, McMahon pushed Altamimi up against the cage, slowing things down. Altamimi, however, latched onto an arm while defending the takedown, and eventually when they did go to the ground, he held onto it through a couple of transitions.

Moving into position, he finally uncorked the arm-bar, extending the limb. That forced the tap in due course, and Adel Altamimi had the biggest win of his career, in front of a national audience!

Altamimi dedicated the fight to his father, who is battling cancer and undergoing chemotherapy. He also addressed his skills on the ground. “A lot of my team calls me arm-collector,” he said of the finishing sequence in the fight. “When I lock this kimura grip, it’s over.”

Here’s a shot of Altamimi (@kyokushininja) & cornerman Chris Pratt on the way out. 😄😁 #Bellator214 pic.twitter.com/r6NnSpcRLT 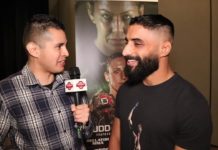