UFC Brooklyn, the promotion’s debut on ESPN, was a giant card filled with talking points afterward. Here are a few of the most noteworthy things we learned.

UFC Brooklyn was the promotion’s first card of 2019, and with that came the first card on ESPN, the home of the Octagon for the foreseeable future. The card contained tons of talent and plenty of interesting fights across the 13-fight card. The card was headlined by a champion vs. champion bout where flyweight champion Henry Cejudo defended his strap against bantamweight champion TJ Dillashaw. The card also featured Greg Hardy’s UFC debut in the co-main spot, and Paige VanZant’s return to the octagon.

Here’s some of the biggest news and headlines coming out of this past Saturday’s card.

Greg Hardy’s UFC tenure officially got underway on Saturday. While technically being contracted since his first fight on Dana White’s Contender Series, he had two more fights on lower regional shows in order to get him ready for the big show. Going into his debut against Allen Crowder, Hardy was 3-0 with all of his victories coming via knockout. However, with all that early success comes very little actual fight-time, only spending a little over two minutes of actual time in the cage.

Going into his fight against Crowder, the former NFL star mired in controversy was expected to handily defeat Crowder, who had all of his previous defeats by KO. Instead, Hardy found himself in a dogfight midway through the second round as he quickly gassed out and Crowder found himself having success with his grappling. As Crowder was turning the tide of the fight, he dove for a failed takedown. As he attempted to scramble to his feet Hardy landed a giant illegal knee, the fight was called off, and Hardy was disqualified.

For what it’s worth, the knee didn’t appear intentional. It just seemed that Hardy didn’t completely know the rules of the Octagon and landed the knee while Crowder lifted one of his knees off the ground and paid the price, losing his undefeated record. However, despite the knee not having ill-intentions, it says a lot that he didn’t even know that it’s illegal to land such a knee. Maybe rushing along someone who had only trained MMA for about two years to a co-main event spot wasn’t such a great idea?

With all that being said, it seemed incredibly perfect for as bad as the UFC has handled Hardy with all the accusations of domestic abuse and rushing him along to the UFC. His debut ended in a disqualification and the chants of “asshole” filling the Barclays Center.

Conor vs. Cowboy seems next

Prior to the UFC announcing Cowboy Cerrone vs. Alexander Hernandez at UFC Brooklyn, there was massive talk that the next fight for Cerrone would be UFC megastar and former lightweight champion Conor McGregor. The fight makes sense for a lot of reasons. Cowboy is a reasonably big star for MMA, and McGregor needs a comeback fight against someone that will be a good matchup for him. He hasn’t officially won an MMA fight in three years, last defeating Eddie Alvarez in 2016. However, all that talk evaporated as the UFC announced Cowboy would be taking on rising star Alexander Hernandez in Brooklyn.

In a fight where Cowboy actually went in as the underdog, we saw a vintage Cerrone performance. Complete with an excellent finishing sequence where he hit Hernandez with a great head kick and finished a fighter who is 10 years his junior via strikes. Cerrone then got on the microphone after the bout and with the whole world watching, called Conor McGregor out for a fight later this year.

McGregor would then respond on Twitter after the bout, actually agreeing to fight Cowboy. Dana White also went on to say at the post-fight press conference that if both men wanted the fight, he would absolutely make it. Given that both men want the fight, and Conor can deal with his drama in Nevada for the UFC 229 post-fight brawl, why not make the fight next?

Plus, it makes a lot of sense given the two’s past. Who would think that four years after arguing at a press conference while both were in different divisions, they would eventually meet? The story writes itself.

Henry Cejudo is establishing his place as a legend

If someone said to you in 2016 that Henry Cejudo would defeat Demetrious Johnson and TJ Dillashaw back to back, you would automatically think they were insane. However, that is the world we are now living in. After winning a very close controversial decision against Demetrious Johnson at UFC 227, he got on the mic and called out TJ Dillashaw for a champion vs. champion fight, a fight that the champion he had just defeated was reluctant to take part in. Dillashaw would then agree after his victory over Cody Garbrandt later in the night, and soon a date was set. The UFC’s debut card on ESPN, and the first card of 2019.

After much talk about shutting down the division and this being the last flyweight fight, it appeared that Dana White sent Dillashaw down to kill the division with a victory over the flyweight champion. However, Cejudo clearly had other plans. With an entire division on his back, Henry Cejudo went out there and knocked out Dillashaw in 32 seconds. Possibly saving his and others’ spots in the UFC, as well as establishing one of the greatest runs in UFC history.

Now while we don’t know the future of the 125-pound division, and don’t know the future of Cejudo, we do know that he is currently on one of the greatest runs ever seen in a lower weight class. He is also well on his way to establishing his place as one of the legends of the sport. Some might think that idea is crazy, but if you look at the facts and his case it’s not outlandish. Following his iffy loss to Joseph Benavidez, he knocked out former title challenger Wilson Reis, dominated Sergio Pettis, ended Demetrious Johnson’s historic run, then knocked out TJ Dillashaw to possibly save the UFC’s flyweight division.

The strides he has made in his game following his first loss to Demetrious Johnson have been tremendous, and who knows how much better he’ll get in the future? It’ll be fun to watch. 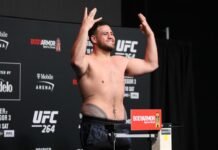 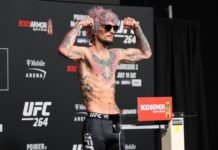