A new year, new U.S. broadcaster for the UFC, and change is in the air. Check out these bold predictions for 2019!

It is always fun playing around with what could be, and as usual with the new year we all have our predictions. Take a look at some bold predictions for the UFC in 2019, which just might become reality.

Win or lose vs. Kamaru Usman at UFC 235, we may see the end of Tyron Woodley being employed by Dana White. The two have not hid their feuds: in fact most of the time their spats are very public. Tyron Woodley is one of the UFC’s most dominant champions; a successful title defense only four months ago would ideally create respect from White. Instead the head honcho has publicly called for another title defense with little off time, and questioned Woodley’s injuries.

As a champion you are almost always given the benefit of the doubt to pick when/who you are going to fight, even with contenders growing in the division. And given the chance to heal when injured. Max Holloway had set fights with Frankie Edgar and Brian Ortega, needing to pull out of both, and White catered to the needs as he would for most champions. Conor McGregor moonlighted in boxing and held his millions for nearly two years while holding a belt, Dana allowed it. Yet for some reason Dana and Woodley can’t find that level of mutual respect.

Max Holloway, in the conversation as one of if not the GOAT of the featherweight division, will not be champion by years end. He will not be defeated, in fact he will successfully defend his belt one more time as king of the division against any of the following: Aldo, Edgar, Moicano, or Volkanovski. In 2019 Holloway will move up to lightweight to fight one of the top dogs of the division, leaving the featherweight gold behind him on a quest for a new golden crown.

After a busy, successful and wild 2018, the eagle will sit out this year. After defeating Conor McGregor at UFC 229, Khabib has been on a world tour of celebration, and has been congratulated in person by Russian President Vladimir Putin. Khabib has made it known he wants his worth, and in a weird way is taking a McGregor-esque approach after his impressive year. At 27-0-0 it is hard to disagree with his want, a big payday to return.

Nurmagomedov has even teased boxing Floyd Mayweather, as ridiculous as it sounds. To add to all of this, Ali Abdel Aziz, the manager of the Russian champ, has publicly stated Khabib has zero interest in fighting Tony Ferguson — who happens to be the unanimous #1 contender, and a fight we have been waiting to see for an eternity. Dana will end up doing something similar with Khabib that he did with Conor: keep the champ happy, let him keep his belt, and return when he is ready.

To see Khabib in 2019 there would have to be some type of super fight. Either a GSP return, a Champ vs. Champ welterweight fight, or McGregor II — all of which seem unlikely as of now. See you in 2020 champ.

Jon Jones is back, of course with controversy. He and Daniel Cormier are both champions. Dana White must be grinning from ear to ear somewhere. The chance to put these two back together, belts on both man’s shoulder, it’s the poster of a lifetime. DC has made it clear (and for good reason) he won’t fight Jones at LHW without drug testing regularly during camp. Jones has scoffed at the idea of moving up to heavyweight to fight champion Cormier, so we are at standstill.

Still, we have eleven whole months left for this to happen, and it is going to. DC wants to beat Jones, it may be the only thing stopping him from being considered the greatest fighter of all time. We will just have to wait and see at what weight or event this massive fight will be held.

Former NFL player Greg Hardy is making his UFC debut on ESPN in Brooklyn in less than a week, and the 3-0 fighter is already going to be a co-main event. That, on a card that features Donald Cerrone and other longtime greats. Yet Hardy was the choice. Filled with controversy, Hardy is far from loved by most of the fan base, but again it is Dana White’s world, and we are just living in it. White clearly doesn’t care what the overall opinion is on Hardy, as he believes him to be a money maker. Seeing as Hardy is only 3-0 and already a co-main event fighter on the first ever ESPN+ card, and given two of his wins came on Contender Series, this bold prediction isn’t even that bold. If Hardy keeps winning Dana will ensure he keeps moving up in the ranks, so don’t be surprised if he is ranked after a possible win this weekend.

Now this is bold, but have faith that it will happen. Conor McGregor is coming off a loss in which he was dominated, and as we have seen before, he usually looks for a quick turnaround after a loss. That was old McGregor though, pre-Mayweather McGregor. The Irish star does have the money to never step into the cage again —  but does his legacy mean more to him?

With that in mind McGregor will fight mid year and at the end of year. Obviously the whole suspension situation stemming from UFC 229 is still ongoing, so once we find out the official word we can really understand this better. Still, a good bet is McGregor vs. Poirier II and McGregor vs. Holloway II this year. Khabib (see the earlier prediction on him) will be out, and Tony Ferguson will wait on him as he should. Poirier is more than deserving of a title shot himself, but has stated he’d love a rematch with McGregor as well. Both of these fights have been rumored, and if Holloway can’t get an immediate title shot when moving up to 155, the only other option he’d take is McGregor. At the end of the day McGregor wants the Khabib rematch, he wants to avenge the loss, so in order to set himself up for that he must be active while Khabib is not.

We haven’t even seen it dismantled yet, but the flyweight division will make a return. Why would the title fight between Henry Cejudo and T.J. Dillashaw at UFC Brooklyn be at flyweight if you are getting rid of it? It doesn’t add up. Even if T.J. wins in Brooklyn, Cejudo puts on a good enough performance to continue the division. Dana will look for new talent, fighters that have the power or smarts to get finishes, which is what the division was missing according to White. Dana was half-heartedly throwing away this division, but is having second thoughts. A slow return for the flyweight division will happen in 2019.

Look for a return of the Interim champions in 2019, something we saw less of in 2018. The lightweight division will see an interim title match at some point in 2019, and possibly the bantamweight division as well if Dillashaw is serious about heading to featherweight looking to win himself three belts at once. Let’s be honest, any chance the UFC has to put a belt on someone, promote them and call them a champion, they will do it.

Who knows what the MMA gods have planned for 2019, we will have to wait and see… 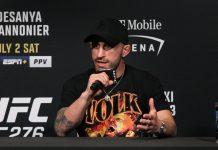