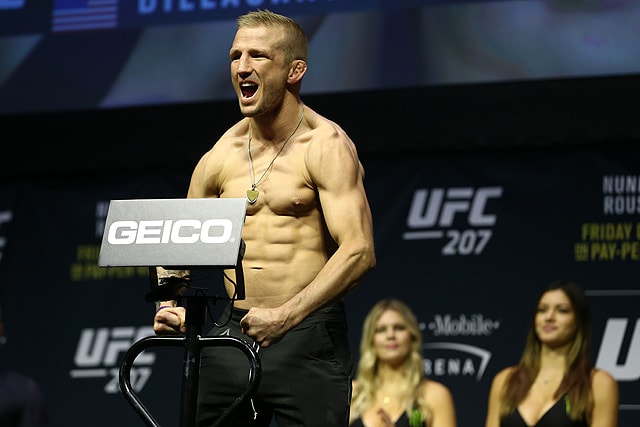 History will be made as TJ Dillashaw looks to become a two-division champion while Henry Cejudo aims to avenge the fall of the flyweight division at the first UFC event on ESPN.

In the last two years, there have been three champion vs champion bouts in the UFC. Each of them had historical value for the fighters involved and propelled each winner into rarefied air. But Saturday’s bout between flyweight champion Henry Cejudo and bantamweight champion TJ Dillashaw carries extra significance beyond both men as the men’s flyweight division is at best being phased out and at worst could be scrapped by Sunday morning depending on the outcome.

For the last several months, the writing has been on the wall that end of the flyweight division is near. The UFC chose to part ways with longtime king Demetrious Johnson to One Championship in exchange for their semi-retired welterweight champion Ben Askren. Several flyweight contenders have already been released or have had to move up to bantamweight.

The fact that bantamweight champion TJ Dillashaw is moving down all the more intriguing. He has now famously been quoted as having been paid to “kill the flyweight division,” and from a marketing standpoint, is not far off. There are more intriguing and lucrative options at 135 that he’s not even expected to give a second thought to moving back up should he claim the flyweight belt.

Dillashaw’s body of work has made him arguably the best bantamweight of the last several years. He destroyed the seemingly unstoppable Renan Barao twice, then lost the world title in a razor-close loss to Dominick Cruz. He’s looked nothing short of fantastic since then as he’s bounced back with easily the most difficult schedule of any bantamweight of the last few years. He dispatched several top fighters consecutively in John Lineker, Raphael Assuncao, and Cody Garbrandt in a run that saw him reclaim championship gold. He was briefly linked to a fight with Demetrious Johnson before talks fell through, leading to a second fight and victory over Garbrandt last August.

The one who could thwart Dillashaw’s best-laid plans is flyweight champion Henry Cejudo. Just minutes before Dillashaw ran roughshod over Garbrandt a second time, Cejudo scored a titanic upset of long-time champion Johnson in a close contest that ended the historic run of “Mighty Mouse.” The victory capped off what has been an incredible comeback following his failed title bid to Johnson back in 2016.

Prior to winning the title, he had lost a controversial split decision to Joseph Benavidez which was unanimously considered a robbery, but left no doubt in defeating top contenders Wilson Reis and Sergio Pettis. While many figured a trilogy with Johnson was next, his departure set the wheels in motion for Cejudo’s champion vs. champion bout with Dillashaw.

Can Cejudo prevent his division from folding with an impressive victory against Dillashaw? It would appear not. The way the flyweight division is currently constructed, there are no notable contenders or even a clear-cut title challenger for Cejudo as of this writing. Respectfully, if Johnson with eleven title defenses was unable to draw in viewers, Cejudo has even less to work with in 2019.

The only victory for the flyweights would be a moral one. For Cejudo to defeat a talent like Dillashaw would give credit to those who claim the company just didn’t capitalize well enough on the talent that was available. What shouldn’t be understated is that in a year where there will be more MMA than ever airing in the US, a Cejudo victory will help bolster the drawing power of a flyweight division as athletes enter the free agent market.

Both men are incredible athletes with dynamic skillsets and their collision is expected to be a showcase of high-level MMA. Henry Cejudo has made great strides in his striking to become a multi-faceted mixed martial artist. His key to victory will be to stay in the face of TJ Dillashaw and constantly threaten with takedowns. Cejudo is an Olympic-caliber wrestler and many have the fight swinging heavily in his favor if he gets on top.

Dillashaw will have several intangibles going into the fight. Most importantly, how much of his power will he carry down to 125? He already carries little body fat at 135 and it’s intriguing how his body will handle the strain of cutting ten extra pounds. When Dillashaw posted photos two weeks out from the fight, fans noted that he was already beginning to look drawn out ahead of the match. For what it’s worth, every champion vs. champion fight in UFC history has always featured the challenger moving up in weight rather than down to claim a second title.

Dillashaw should use kicks to chop away at the mobility of Cejudo early and hamper his ability to explode with his wrestling. Dillashaw is the sharper striker and should look to begin his combinations with punches and finish with kicks to unravel the flyweight champion. While he has shown himself to be a competent grappler, he should still look to avoid long periods against the fence where Cejudo is able to pin him against the cage.

A TJ Dillashaw victory would likely carry him past Dominick Cruz in terms of being considered the best bantamweight of the past decade and set him up as an even bigger star as he returns to bantamweight to face either Marlon Moraes or Raphael Assuncao, who fight next month. For Henry Cejudo, he will likely meet with the UFC to discuss a possible future at 135 or a push for free agency.