‘Thug Rose’ has her next title defense set. As expected, women’s strawweight champion Rose Namajunas will put her belt on the line against Jessica Andrade later this year. The twist? The fight will take place in Brazil at UFC 237.

Another day, another big fight revealed for the UFC’s first half of 2019. Late Monday (or early Tuesday, depending on where you lay your head), ESPN reported that Rose Namajunas would face Jessica Andrade, with the UFC strawweight title on the line. The outlet cited none other than UFC President Dana White in unveiling the news. The card, which does not have a venue set, will take place in Brazil on May 11.

For ‘Thug Rose,’ the meeting with Andrade has been a long time coming. The fight will be the second defense of her 115lb title, and it was almost certain that Andrade was next in line. Namajunas (8-3) has fought Joanna Jedrzejczyk twice in a row, knocking out the former ‘Joanna Champion’ to win the title, then earning a unanimous decision while defending it.

Rose Namajunas entered the UFC as part of The Ultimate Fighter 20, which introduced the strawweight division. On the show, she made it all the way to the finale, losing to Carla Esparza in her first attempt at winning gold.

Jessica Andrade (19-6) had her own earlier shot at gold as well. A former bantamweight, the Brazilian faced Jedrzejczyk in a failed title challenge at UFC 211 in 2017. Since then, she has won three straight, dispatching Claudia Gadelha, Tecia Torres, and Karolina Kowalkiewicz in a twelve-month span.

No other fights have yet been announced for UFC 237, including a main event. For now, the big story will be the UFC’s young champion heading into enemy territory for her next title defense. Namajunas has been nursing injuries of late, but should have plenty of time to recover before May rolls around. 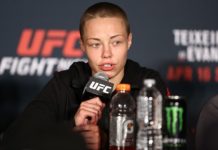 Report: Rose Namajunas Out of UFC 249 Bout with Jessica Andrade