The UFC’s heavyweight division is getting a boost thanks to the return of ‘Big’ Ben Rothwell, who is expected to face Blagoy Ivanov in March, according to a new report.

Heavyweight Ben Rothwell, he of the supervillain cackle (remember that?), will be back in action this March. That’s according to a report by MMA.bg, who were first to report the news earlier this week. Rothwell will be taking on Bulgarian standout Blagoy Ivanov in his return, which does not yet have an official date. March has an astounding five UFC events, starting with UFC 235 on March 2 and ending with UFC on ESPN 2 on March 30.

Rothwell (36-10) hasn’t been seen in the octagon since UFC Fight Night 86, when he was defeated by former heavyweight champ Junior Dos Santos. Prior to the loss to JDS, ‘Big’ Ben had been on a four fight win streak that included victories over Alistair Overeem and Josh Barnett. However, injuries and a failed drug test under USADA then saw him forced to the sidelines.

At age 37, and out of action for nearly three years, Rothwell will have a lot of catching up to do. The heavyweight division is a vastly different landscape from the one he left three years ago, and Ivanov (16-2, 1NC) will be an interesting test for the returning fighter. The Bulgarian is a former Bellator title challenger and WSOF champion who had a five fight winning streak snapped when he suffered his own defeat against Dos Santos at UFC Lincoln last year.

Rothwell’s suspension is officially up in early February, and as is the case with all active USADA athletes on suspension, he has remained in the testing pool. 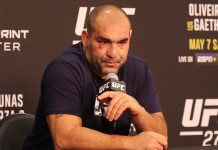 UFC 274: Blagoy Ivanov Addresses Whether He Has the Best Chin in MMA