Bad news, Bellator MMA fans — Gegard Mousasi is off of the upcoming Bellator 214 due to a back injury, leaving Rafael Lovato Jr. without a fight.

Bellator 214 in Los Angeles next month has been dealt a heavy blow. Middleweight champion Gegard Mousasi had been expected to defend his title for the second time at the event, against top contender and BJJ expert Rafael Lovato Jr. However, an injury to Lovato has forced Mousasi off the card. The news was first reported by ESPN.

Mousasi (45-6-2) has been one of the hottest middleweights on the planet over the past couple of years. He left the UFC on a tear with wins over the likes of Chris Weidman, Vitor Belfort, and Thiago Santos, and picked up right where he left off after moving to Bellator, defeating Alexander Shlemenko, then Douglas Lima for the promotion’s 185lb title. After defending the belt against welterweight champ Rory MacDonald, Mousasi’s defense against the undefeated Lovato Jr. was highly anticipated.

Lovato Jr. (9-0) earned the shot in a title eliminator against John Salter earlier this year at Bellator 205. Now, however, he’ll will have to wait for a crack at gold. For the time being, Lovato remains on the card, but whether the promotion will eventually pull him, or seek a new opponent, remains unclear.

While the exact nature of the injury has not been specified, it’s believed Mousasi suffered a back injury.

Bellator 214, which takes place at The Forum in Los Angeles on January 26, is headlined by Bellator’s World Heavyweight Grand Prix final between Fedor Emelianenko and Ryan Bader. 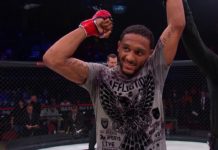 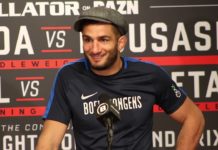 Bellator 228’s Gegard Mousasi: “You Will See a God in There” Next Fight