Athletes in the world’s largest MMA promotion will now have the option of having custom meals prepared for them during fight camps and fight week, the promotion announced Wednesday.

The UFC is making it easier for fighters who are in camp to get the nutrition they need. On Wednesday, the promotion announced via press release that it was launching a nutritional program in conjunction with Trifecta, described as “the nation’s largest all-organic meal delivery service.”

The program will run out of the UFC Performance Institute (recently announced as expanding globally), and be made available to athletes who opt in during their preparation for upcoming UFC events. While the cost was not disclosed, it is expected to be a savings for fighters. Custom meal plans will be created for athletes during fight camp and fight weeek.

“Trifecta’s new fight prep program is an absolute game-changer for UFC athletes,” UFC Vice President of Operations – Performance Institute James Kimball said in Wednesday’s release. “With the offering of this program, athletes— should they choose to participate— will have access to culinary chefs and sports dietitians who can offer the highest-quality, individualized nutritional support and meal planning for the fighters. Proper nutrition and meal prep are critical elements that help each UFC athlete compete in the Octagon at an optimized level, and we’re thrilled with Trifecta’s commitment to evolve the sport of MMA through this innovative program.”

The program, which had a trial run this year, will officially launch in the first quarter of 2019.

“We are thrilled to partner with UFC to make this program a massive success,” said Greg Connolly, Co-Founder and CEO of Trifecta. “Large sports organizations, from the strength and conditioning coaches on up, have long known how critical nutrition is to performance, and UFC is the first to act on that knowledge. With UFC, we will be providing fully prepared food to the participating fighters with individualized macro and calorie levels designed to optimize their health and weight management. We’re excited to see nutrition in this sport finally rising to the next level.”

More details regarding the program can be expected in the coming weeks, as the promotion kicks off it’s 2019 schedule in Brooklyn on January 19. 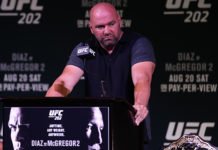