Despite a bit of a heated confrontation prior to UFC Milwaukee, Drakkar Klose had nothing but kind words for Bobby Green after the fight.

Milwaukee, WI — Drakkar Klose picked up a unanimous decision win at UFC Milwaukee, against Bobby Green — a man Klose considers a friend. However, Green went after Klose at the weigh-ins, and was visibly upset by the decision, to the point of announcing his retirement later in the night on Saturday.

Klose, for one, is hoping the friendship is intact, however, and praised Green after the fight, speaking with reporters back stage. “I thought I could have did a lot better. Bobby, he’s probably the toughest opponent I’ve faced so far. Given his time off, I think he trained the hardest ever for this fight against me.”

“I consider him as a friend, hopefully we’re still friends after this,” Klose said. “It kind of sucks that it went down, we had to fight each other. Maybe it was a misunderstanding, we had the same manager at the time.” In other words, the two squaring off in the octagon was all business, at least for Drakkar Klose.

As for the weigh-in incident, Klose believes that was just Green hyping himself up. And the two did speak on the way out. “We walked together, he talked to me, no hard feelings.”

“I’m glad I can say I fought Bobby Green. He was making a run at a title shot before he got injured and all that,” Klose later added. 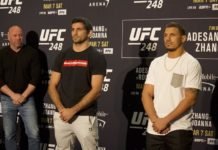 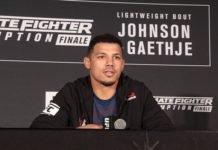 UFC 241: Drakkar Klose Wants the Fight No One Else Does, Gregor Gillespie 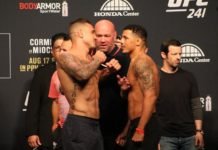