A pair of former welterweight champs will finally meet at KSW 47 in March, as Borys Mankowski vs. Dricus Du Plessis has been announced.

The KSW 47 card in March has another big fight on its hands. On Monday, the Polish MMA outfit announced via press release that former champions Borys Mankowski and Dricus Du Plessis would collide at the at the Atlas Arena in Lodz, Poland on March 23, 2019. It’s the second attempt at booking a scrap between the pair, who were previously linked to a fight at KSW 41.

Mankowski (19-7-1) lost the KSW welterweight championship at KSW 41, after facing Roberto Soldic, who stepped in for Du Plessis. He’s been out due to injury since, though he was briefly linked to a fight at KSW 46 earlier this month. Mankowski holds notable wins over Jesse Taylor and David Zawada, among others. However, he has not won since 2016, after losing both his fights last year, and sitting out 2018 with injuries.

Mankowski was KSW’s longest-reigning welterweight champion, prior to losing his title.

Dricus Du Plessis (12-2) captured the KSW welterweight title from Soldic earlier this year at KSW 43, only to lose it back to Soldic in an immediate rematch at KSW 45. Before the second Solid fight, the South African had been on an eight fight winning streak.

Mariusz Pudzianowski is also set to appear at KSW 47. The heavyweight and former strongman will face Olympian Szymon Kołecki. 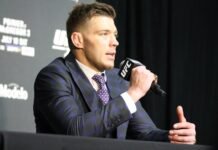 UFC 264 Bonuses: O’Malley vs. Moutinho Claims Fight of the Night