Zak Cummings made some questionable decisions at times, but he did enough Saturday at UFC Milwaukee to earn a split decision over Trevor Smith.

The first of back-to-back middleweight bouts at UFC Milwaukee on Saturday saw Zak Cummings, veteran of The Ultimate Fighter 17, step into the octagon with former Strikeforce light heavyweight Trevor ‘Hot Sauce’ Smith. Both fighters were coming off recent losses, but Smith in particular needed to put some pepper on things, as he entered the night 1-2 in his last three.

Smith and Cummings spent the first half of the opening round of their contest feeling each other out on the feet. Cummings, working from southpaw, fired off leg kicks, trying to draw Treveor Smith in on counters. Smith, however, was finding some success, and both men were showing a bit of blood early. Cummings would land a crisp right in the final minute, while Smith sought to land his lead left. Cummings then shot in for a takedown, only for ‘Hot Sauce’ to time it, welcoming his opponent’s shot with a knee.

The second round again started with some spirited back and forth on the feet. Smith was showing a lot of redness around the face, and Cummings used lateral, frankly unorthodox movement to keep his opponent guessing. Smith was fighting on the outside, and when he did launch counters, more often than not, Zak Cummings was nowhere to be found.

Round three was bound to be interesting, as the bout to that point had been a tough one to score. While Cummings might have held a slight edge, Smith was right there with him. However in the first minute Cummings clipped his opponent, landing behind the ear and sitting him down. Cummings, looking to take advantage, instead found himself on his back, Smith managing to get into half-guard. Cummings, however, would make it back up, landing a number of left hands, only to shoot, right into a guillotine attempt. Smith didn’t have it, however, and Cummings controlled the back briefly until he slipped off the side, allowing Trevor Smith to get back in control, firing ground strikes.

Still, Cummings did enough in the third to secure the win, taking two of three rounds on all three scorecards. 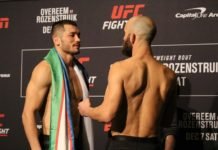 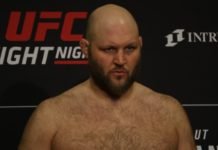 UFC On ESPN 7: Under The Radar Fights